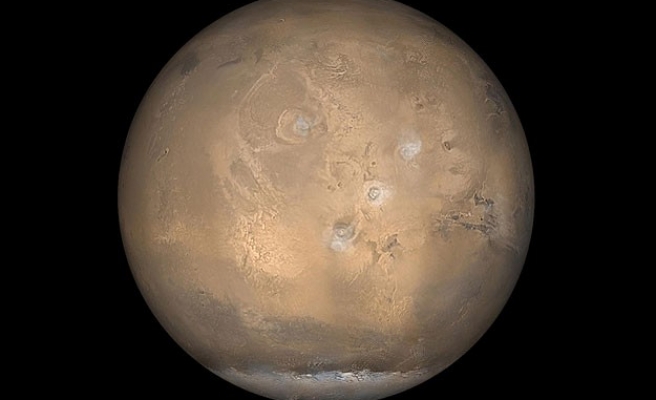 World Bulletin / News Desk
The idea of living on another planet has gripped the imagination of scientists and dreamers for centuries – now one Turkish architect is turning those dreams into reality.

Gulay Yedekci has designed an entire extraterrestrial community which could one day be home to human beings on Mars – over 54 million kilometers from Earth.

The red planet – so-called due to the red iron oxide existing on its surface – has made the headlines recently as NASA scientists and the Dutch-based Mars One foundation revealed plans to send people there for the first time.

Yedekci, associate professor at the Faculty of Architecture at Istanbul’s Yeni Yuzyil University, lectures in “Future Architecture.” She is the only Turkish academic working in this field.

Although Turkey currently has no space agency, officials have said it is preparing to build one in the future.

Yedekci began the “Mars Road” project in 2013 and, together with an eight-strong team, completed the concept in around two years.

“We’ve designed bell jar-shaped cities, which will include multistory buildings and underground places linked to each other,” says Yedekci.

“Underground places will be built in order to protect from meteor attacks or any threats,” she adds.

According to the draft project, shopping centers to green houses, farms to education centers and almost every kind of facility will exist in the living area, which is expected to cover 10,000 square meters.

Their first step is terraforming. The design envisages greenhouses and farms to produce oxygen to support life.

“There is a very small amount of oxygen and no nitrogen balance there. These two elements make things difficult for us,” Yedekci says.

Ninety-five percent of the planet’s atmosphere is composed of carbon dioxide.

According to NASA, Mars has much lighter gravity (one-third of Earth norm) and a much thinner atmosphere. Humans cannot survive unaided on its surface.

It's also much colder on Mars than on the Earth; the average temperature is –64C.

For construction, 3D printers will be used. No materials are planned to be taken from the Earth, but will be provided by the red planet.

Yedekci calls on other Turkish scientists to join them. “Our project is open to everyone. We need scientists from every field, from chemistry to zoology.”

Within one year, Yedekci and her team will reveal three alternative projects to be selected.

The project, which Yedekci claims would cost approximately $30 billion, would enable 100 people to live on the planet for 18 months.

Mars has always loomed large in the human imagination: Named after the Roman god of war, the planet was the subject of Orson Welles’ notorious 1938 radio play about a Martian invasion of Earth, which caused a nationwide panic.

Now, if everything goes according to plan, a Turkish architect could have her name written on the famous red planet for the first time.