Turkish court announced verdicts on 275 suspects accused of plotting to topple the government, ruling prison sentences to some and acquitting 65 others in the trial came to known as Ergenekon. 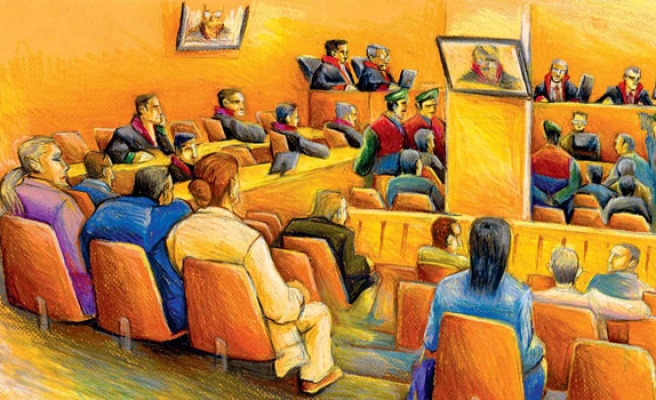 An Istanbul high criminal court on Monday announced its verdicts on 275 suspects of the six-year-long Ergenekon trial, who were accused of plotting to depose the Justice and Development (AK) Party government, ruling prison sentences of up to two counts of life imprisonment to some and acquitting 65 others.

Reading the verdicts individually in the presence of the defendants during the hearing held in Silivri Penal Institutions Campus, the chief judge announced the final verdict of the landmark trial of Turkey, the Ergenekon case, lasting about 6 years and 2 months, which was filed against 275 people including military officers, politicians and journalists over a conspiracy to overthrow Turkish Prime Minister Recep Tayyip Erdogan's government.

The Turkish court convicted Turkey's former Chief of Staff retired general Ilker Basbug of attempting to overthrow the government and sentenced him to life in prison.

Basbug was the most prominent defendant among 275 people facing verdicts on Monday.

The six-year-long Ergenekon trial has been the center of tensions between the country's secular elite and Erdogan's AK Party.

The defendants are accused of plotting high-profile attacks that prosecutors said were aimed at sowing chaos in Turkey to prepare the way for a military coup, and of being part of an alleged organization called Ergenekon, taking its name from a legendary valley in Central Asia, the ancestral homeland of Turks.

In thousands of pages of indictment, prosecutors maintained that the gang was behind a series of violent acts, including one in 2006 on a courthouse that killed a judge, in a bid to create turmoil and provoke a military intervention.

Prosecutors previously claimed that the organization further plotted to kill Erdogan, Nobel laureate author Orhan Pamuk and other high-profile figures, all of which were rejected by the defendants.

Prosecutors demanded life imprisonment term for 64 of the defendants, mostly on terrorism charges while seeking imprisonment terms for others such as 15 years in prison for possession of firearms or being Ergenekon members.

Turkish security forces on Monday blocked hundreds of demonstrators from reaching the courthouse in the Silivri district, some 40 kilometers west of Istanbul, wanting to hold a rally in support of the defendants.

The names of the suspects receiving sentence and their sentences are as follows:

Leader of a criminal organization Sedat Peker to 10 years,

Tuncay Ozkan to aggravated life imprisonment for "conspiring to stage a military coup" with an additional 22.5 years for other crimes

Ret. Captain Muzaffer Tekin to 2 counts of aggravated life imprisonment along with 117 years,

For all those who may find this verdict distasteful, I offer two words: Adnan Menderes.