A Turkish court evening ordered the arrest of 102 suspects in the investigation into the Sledgehammer Action Plan, including former army commenders. 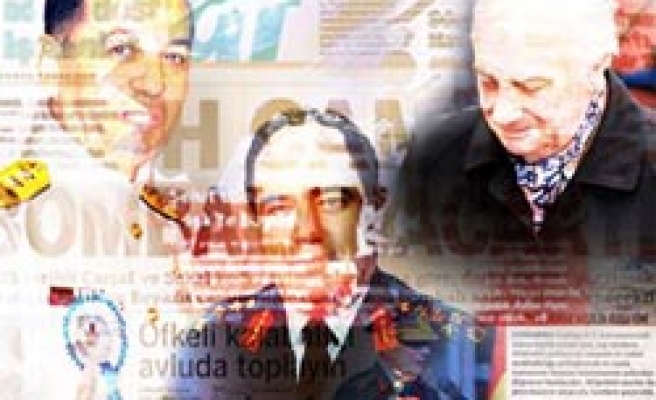 A Turkish court late Friday evening ordered the arrest of 102 suspects in the investigation into the Sledgehammer Action Plan, a subversive plot allegedly prepared by a clique inside the military that included plans to crash Turkish jets and bomb large mosques at busy prayer hours to undermine the Justice and Development Party (AK Party) with the hope of eventually overthrowing it.

The 10th High Criminal Court ordered the arrest of 102 suspects, including two former force commanders. The court earlier this week accepted the prosecution's indictment against the suspects. The court judges unanimously ruled for the arrests, Cihan News Agency said.

According to the indictment, the junta led by Gen. Dogan hoped to “benefit from” the outlawed Kurdistan Workers' Party (PKK) as well as some other ultra-leftist and communist terrorist groups. The coup plotters used the chaos created ahead of the March 12, 1971 memorandum and the Sept. 12, 1980 coup as a precedent for their actions. The social unrest in the country ahead of these other military interventions is thought to have aided the military in seizing control of the country.

In another document, titled “Suha Tanyeri's Plan Seminar Notes,” mentioned on page 953 of the indictment, Tanyeri also suggests cooperating with the PKK to fight “reactionaryism.” “The people who will cooperate with the PKK for this purpose should be determined beforehand,” the document states.

Sledgehammer is a suspected coup plot created in 2003 at a military gathering with the intent of overthrowing the ruling AK Party government. According to the plan, the military was to systematically foment chaos in society through violent acts, among which were planned bomb attacks on the Fatih and Beyazıt mosques in İstanbul. The plot allegedly sought to undermine the government and to lay the groundwork for a military takeover.

According to the indictment, the designation of the plan was changed from a seminar plan to a coup plan after the election of the AK Party in 2002. The indictment further alleges that Gen. Dogan, who was uneasy with the AK Party receiving the majority of the vote in the Nov. 3, 2002 elections, took the initiative to devise a coup plan, saying that Turkey would lose the “gains of Feb. 28.”

On Feb. 28, 1997, the military orchestrated the demise of a coalition government led by a now-defunct conservative party. The instigators sought to set up a national consensus government after toppling the AK Party based on Article 35 of the Internal Service Code, which stipulates that the duty of the Turkish Armed Forces (TSK) is to protect the Turkish motherland and the Constitution. The plan says groups that cooperate with the AK Party government, and are defined as reactionary, should be “cleared out.”

The prosecutors state in the conclusion of the document that military officers who attended the 2003 military seminar, at which participants allegedly drafted the Sledgehammer coup plot targeting the AK Party government, were also informed of the meeting's purpose beforehand. One hundred sixty-two military officers reportedly attended the seminar. Among the 162 officers are 25 active duty generals and 95 retired officers.

Among other Sledgehammer suspects are generals and admirals on active duty, including Gen. Nejat Bek, Vice Adm. Mehmet Otuzbiroglu, Maj. Gen. Ahmet Yavuz, Maj. Gen. Gurbuz Kaya and Rear Adm. Caner Bener. The list of suspects does not include any civilians.

According to the indictment, the coup plotters determined where to deploy all military personnel during and after the planned takeover. The military forces were set to be concentrated in İstanbul and Bursa. The indictment also states that the gendarmerie was to operate in cooperation with the 1st Army. Gendarmerie forces were intended to mobilize every province after the planned coup.

The suspects are accused of a failed attempt to destroy Parliament and overthrow the government. Such a charge calls for a jail sentence of up to 20 years in prison.

The İstanbul court's decision will greatly influence the Supreme Military Council (YAS) meeting, which is scheduled to be held in early August. Military officers whose names are mentioned in the document will not be eligible for promotion at this year's YAS meeting.

The list of the 102 people to be arrested and jailed for pending trial consists of the following names: