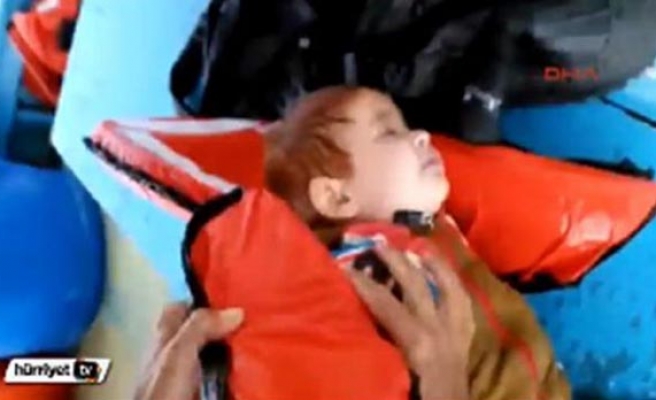 A video has shown the miraculous rescue of fishermen discovering a boy in a life-jacket floating separately from a group of refugees nearby.

Two refugee boats were  travelling from Turkey to Greece and have reportedly capsized in the past week with fatalities and missing persons.

The fishermen initially thought the infant was dead but then heard it making sounds and then pulled him in from the water, working quickly to help the child. They removed the boy's life-jacket and then turned him onto his front to clear his airway.

“He was all pale. We suspected hypothermia as he was cold and his hands and feet were all white. He was also frothing at the mouth,” boat captain Recep Evran told local press.

“A tow-boat from the harbor arrived to help us before taking the baby to Kuşadası.”

The infant, identified as Muhammad Hasan, was taken to the İzmir State Hospital after initial treatment in Kuşadası and is apparently in good health following the ordeal.

It is understood the fisherman also helped the group of refugees, mostly women, floating nearby.

“They were trying to explain with hand signs that there were 30 people in the water. We think the others are deep at the bottom of the sea,” Mr Evran added.