Erdogan said this civilization has centered on helping people and nations in any part of the world, who were persecuted, being in solidarity with them and coming to the aid of these people. 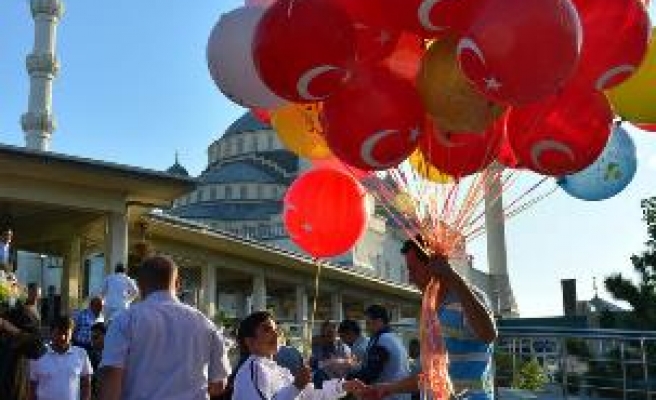 Turkish leaders issued Wednesday messages on Eid al-Fitr, which is to be celebrated on Thursday in the Muslim world.

In his Eid al-Fitr message to the Turkish people, Turkish President Abdullah Gul celebrated his citizens' Eid al-Fitr and stated they would decisively continue to their reform studies for bringing Turkey up to an economically developed country, to deepen Turkish democracy and the law system and to broaden individual rights and freedoms.

Head of Turkish parliament Cemil Cicek in his Eid al-Fitr message expressed his beliefs that they should not give up consensus, cooperation, kindness, respect, democratic rule and tradition for solution of problems.

In his message, he also added death tolls of innocent people due to incidents in close countries to Turkey like Egypt and Syria hurts Turkey.

Turkish Prime Minister Recep Tayyip Erdogan's message for Eid al-Fitr stated that they were representatives of a civilization, which interiorised the brotherhood feelings and spread this atmosphere to a whole year, which were brought by Eid.

Erdogan also said that this civilization has predicated helping people and nations in any part of the world, who were persecuted, being in solidarity with them and coming to the aid of these people. He added that they as a "nation got their power from civilization values, from justice and right."

Meanwhile, Secretary General of the Organisation of Islamic Cooperation Ekmeleddin Ihsanoglu, in his Eid al-Fitr message, stated his hopes for the alleviation of blood and tears as soon as possible in the Islamic world.

Eid al-Fitr is the festival of breaking of the fast also called as 'Bajram', which is an important religious holiday celebrated by Muslims worldwide that marks the end of Ramadan, the Islamic holy month of fasting. Eid al-Fitr is celebrated for one, two or three days and is the first day after Ramadan when Muslims do not fast. It is customary to acknowledge the day with a small sweet breakfast, preferably of the date fruit, before attending a special Eid prayer (known as salaat) early in the morning.

The month Ramadan has to do with the communal aspects of the fast, which expresses many of the basic values of the Muslim community like empathy for the poor, charity, worship, steadfastness and patience. Fasting is also believed by some scholars to extol fundamental distinctions, lauding the power of the spiritual realm, while acknowledging the subordination of the physical realm. It also teaches a Muslim to stay away from worldly desires and to focus entirely on God and to be thankful for the blessings.