This year, 1,248 wrestlers of various weight classes arrived in Edirne to compete at a stadium in Sarayiçi Er Meydanı in the northwest of the city. 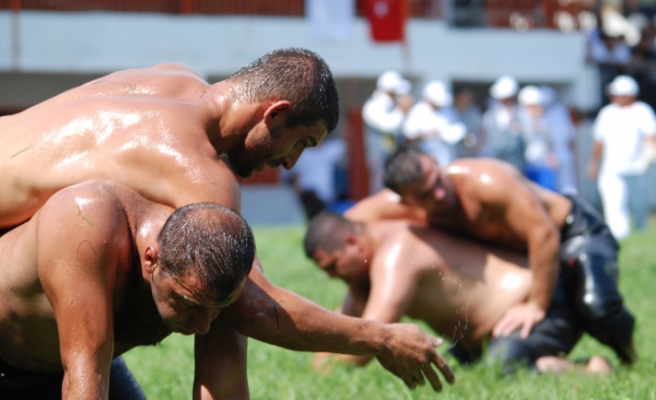 The 651st traditional Kırkpınar Oil Wrestling and Cultural Activities Festival officially began on Friday with a parade through Edirne.

The longest continuously held sporting competition in the world kicked off in the northwestern province of Edirne with a celebratory march led by Edirne Mayor Hamdi Sedefçi and this year’s sponsor, Seyfettin Selim.

Following these two men were athletes, representatives from civil society organizations, sponsors from years past and musicians playing traditional drums and pipes. Last year’s winner of the title of chief wrestler, Ali Gürbüz, carried the Turkish flag in the parade. The group proceeded from the city center to the Talatpaşa motorway.

Before the procession began, Sedefçi met Selim to present him with flowers and the Golden Belt that will be awarded, along with the title of chief wrestler, to the winner of this weekend’s competition.

This year, 1,248 wrestlers of various weight classes arrived in Edirne to compete at a stadium in Sarayiçi Er Meydanı in the northwest of the city.

After the procession, the ceremony continued in the Pehlivan Cemetery at Selimiye Mosque, where Edirne mufti (religious leader) Ömer Taşçıoğlu recited the prayer traditionally offered before the competition.

The first day of the festival brought out the youngest wrestlers, who competed in the junior and encouragement rounds. These lower categories are typically composed of younger, smaller wrestlers, as young as 12. The young athletes are put into categories by the judges with respect to their size, age and wrestling history.

The competition will conclude with the announcement of the chief wrestler and an awards ceremony on Sunday.

Kırkpınar’s fame has been spreading to the rest of the world. In 2010, UNESCO added the Kırkpınar festival to its Intangible Cultural Heritage (ICH) list. The 2003 Convention for the Safeguarding of the Intangible Cultural Heritage describes items on the list as providing generations “with a sense of identity and continuity, thus promoting respect for cultural diversity and human creativity.”