CHP leader Kemal Kilicdaroglu and MHP leader Devlet Bahceli made the shock revelation of former Organization of Islamic Cooperation chief Ekmeleddin Ihsanoglu as their candidate in a meeting. 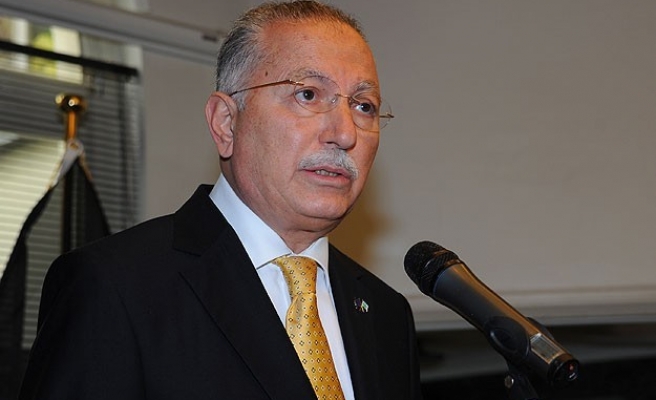 CHP leader Kemal Kilicdaroglu and MHP leader Devlet Bahceli made the shock revelation of former Organization of Islamic Cooperation chief Ekmeleddin Ihsanoglu as their candidate in a meeting.

"This proposal is good for our nation. The MHP is also wishing to unite behind this name and to conclude the presidential election without it turning into a crisis," the head of the MHP, Devlet Bahceli, said in a joint statement with his CHP counterpart, Kemal Kilicdaroglu.

"Under today's circumstances, we will be working on this name together," Bahceli said.

The decision of the pro-secular center-left CHP and the right-wing MHP to put forward Ihsanoglu, known to be a moderate Islamist in the traditional sense, as a joint candidate for presidency has sent shockwaves across Turkey.

If he accepts, he will be most likely challenging Prime Minister Recep Tayyip Erdogan for the position. Although Erdogan is yet to officially reveal his candidacy, he has already been put down as the favorite to win.

Ihsanoglu needs 20 MPs to support his candidacy before he can be officially stand for the election, scheduled for August 10.

The vote will be the first time that Turkey's president is elected by direct popular vote.

A candidate needs more than 50 percent of the popular vote to be elected in the first round. If none of the three expected candidates receives the required percentage, there will be a second round on August 24 between the two candidates who received the most votes.

The former Secretary General of the Organization of Islamic Cooperation, Ekmeleddin Ihsanoglu described on Monday his joint candidacy by the opposition parties as a ‘great kindness.’

“It is a great kindness to be part of the focal point of this reconciliation,” said Ihsanoglu in a written statement.

“Undoubtedly that there are many other highly qualified people who deserve this post. I welcome the joint decision of the CHP and the MHP with respect and gratitude,” Ihsanoglu added.

“This conciliation that the nation is in need and which is persistently demanded, is no doubt an important step to ensure peace and the stability in our country,” he said.

WHO IS EKMELEDDIN IHSANOGLU?

Ekmeleddin Ihsanoglu is a Turkish academic, diplomat and former Secretary-General of the Organization of Islamic Cooperation (OIC), the second largest intergovernmental organization after the United Nations.

Ihsanoglu was the founder of the Department of History of Science at the Faculty of Letters of Istanbul University, and he remained the chairman of that department between 1984 and 2003. He was also a lecturer and a visiting professor at various universities, including Ankara University, the University of Exeter, United Kingdom (1975–1977), Inonu University (1970–1980), the University of Malatya (1978–1980), and Ludwig Maximilians University of Munich, Germany (2003).

After taking the office as the ninth Secretary General of the OIC in January 2005, Ihsanoglu coordinated the drafting and implementation of a reform program for the OIC aiming to increase the efficiency and effectiveness of the 57-member Organization .

His mandate as the Secretary-General of OIC expired on 31 January 2014.