The tapes allegedly feature a conversation between the Prime Minister and his son. However doubts were raised over the authenticity of the recording as it shows Erdogan calling from Ankara on a particular day and time when he was actually in the city of Konya addressing a crowd. 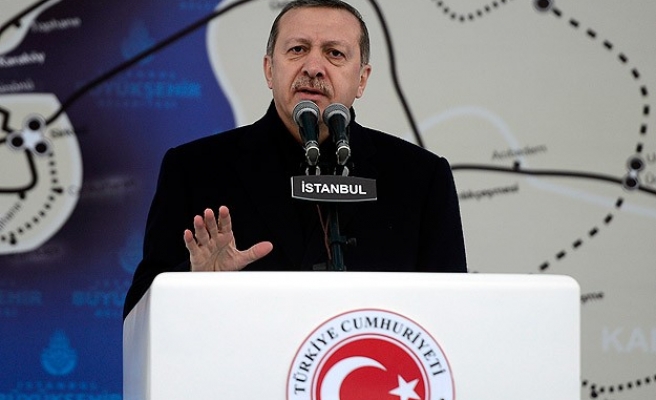 Turkey's Prime Minister Recep Tayyip Erdogan called the December 17 operation a 'conspiracy' to take away 'the will' of the people, speaking Tuesday at his Justice and Development (AK) Party group meeting at Parliament.

Erdogan said that tapes published on Monday allegedly featuring his voice were fabricated and illegally distributed, and he pledged criminal action against those responsible.

The tapes allegedly feature a conversation between the Prime Minister and his son. However doubts were raised over the authenticity of the recording as it shows Erdogan calling from Ankara on a particular day and time when he was actually in the city of Konya addressing a crowd.

The Turkish government accuses a "parallel state" nestled in the judiciary and police of trying to target the government ahead of March 30 local elections.

"This attack (by the parallel state) is not against Recep Tayyip Erdogan, or the Chairman of the AK Party, but it is an attack against Turkey and its Prime Minister," he said.

"The people don't believe these lies," Erdogan called back to loud cheers and applause from the public gallery.

"They went and made a shameless montage and released it. If you're going to make it up, there is a moral and decent way of making things up," Erdogan said. "They are even listening to the state's encrypted telephones. That's how low they are."

"There is no allegation that we cannot answer."

"Can you imagine the stories you can write out of those two or three sentences, with no context, no background?"

Erdogan held the parallel state responsible for this activity, calling it "blackmail," in his speech today at Parliament.

"We will bring legal action against these (wiretapping) activities. If we let it go on, there will be no privacy for families, nor for the state in this country," he said.

Opposition leader calls on Erdogan to step down

Despite the fact that the recordings have been said to be fake, Kilicdaroglu expressed his anger at the supposed conversation between Prime Minister Erdogan and his son by calling on Erdogan to either leave the country or resign.

''My recommendation to you (Mr. Erdogan), is either leave the country or resign as prime minister,'' he said.

''Someone who steals from the state cannot sit in that seat. He should leave that seat because a thief cannot be a prime minister,'' Kilicdaroglu claimed regarding the prime minister.

The opposition leader has repeatedly called on Erdogan to step down as prime minister, accusing him of attempting to cover up evidence which indicts him in an ongoing graft investigation against a number of Turkish bureaucrats.

Prosecutors accused of wiretapping to be investigated

Turkey's top judicial board on Tuesday voted to launch an investigation into the two prosecutors alleged to have illegally wiretapped thousands of people including prominent politicians, businessmen and journalists.

The two prosecutors, Adem Ozcan and Adnan Cimen, agreed to be investigated by the Supreme Board of Judges and Prosecutors (HSYK).

The ruling requires ratification from the Justice Ministry.

Turkey's dailies published Monday a list of 7,000 people -- including Turkish Prime Minister Recep Tayyip Erdogan as well as a number of politicians, journalists, academics, business leaders and civil society representatives -- whose phones had been wiretapped for three years, by two prosecutors of the Istanbul Court who are allegedly linked to a "parallel structure" nestled within the country's police and judiciary.

The alleged interceptions took place as part of a legal file run by an Istanbul court under the Anti-Terrorism Act.