Clashes are continuing between police and protesters in central Istanbul as trade unions and campaigners defy a ban on holding a May 1 Labor Day rally in Taksim Square. 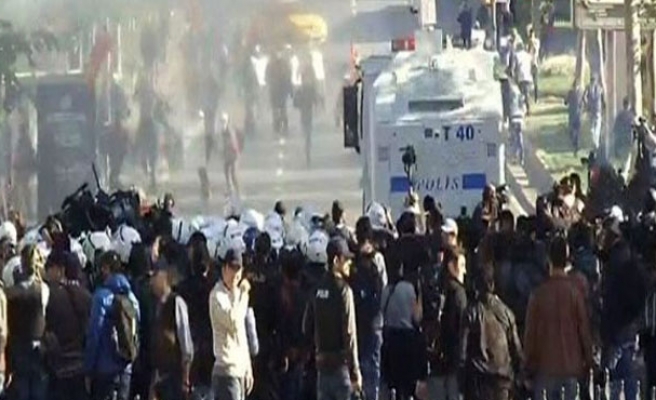 Turkish police have started dispersing illegal May Day protests in parts of Istanbul, after a number of groups including the main opposition party vowed to defy protest bans in certain areas.

Tear gas and water cannon have been used to disperse crowds in the Besiktas and Okmeydani districts after police warned protesters to leave, stating that they had been allocated protest space at Yenikapi and Kadikoy.

Stones, fireworks and ball bearings were thrown at police in Okmeydani where protestors chanted the name of Berkin Elvan, an Istanbul teenager fatally injured by a police tear-gas canister fired during anti-government protests last year.

Protests have been banned from being held in Taksim Square, the focal point of last year's Gezi Park riots, but Istanbul’s governorate said that it would allocate 300 free buses to take people to an ‘approved’ protest site at Yenikapi, several miles from Taksim Square.

Trade unionists and other campaigners have claimed that a ban on gathering at the iconic site contravenes both the Turkish constitution and European human rights legislation.

Many public transport routes in the city have been affected by security operations with trams, buses and cross-strait ferries being cancelled.

Helicopters are still hovering overhead after one large group of protesters remained halted at police lines in Barbaros Boulevard on the way to Taksim Square, although latest reports indicate that most large groups of protesters have been dispersed into side-streets and that police are clearing some barricades.

A worker was injured by stones thrown from some protesters as he drove clearing equipment to remove makeshift barricades erected on the street.

Other areas of the city center remain calm although traffic and transport have been disrupted by the protests and security operation.

Some local residents in the Sisli district have been evacuated due to heavy use of tear gas. One elderly female resident was taken to hospital suffering from the effects of tear-gas inhalation.

Some Twitter accounts of the protests have claimed that residents of Besiktas district have been distributing gas masks and lemons to demonstrators counteract the effects of gas.

Two hundred members of two separate unions were allowed to enter Taksim Square this morning to lay a wreath commemorating the deaths of 36 people during a May 1 demonstration in 1977.

The site has symbolic status for trade unionists and labor activists in Turkey. On May 1, 1977, as some 500,000 people gathered the square to celebrate Labor Day unidentified gunmen fired on the peaceful crowd. Thirty-six people died in the rioting and fighting which followed. Taksim Square remained closed to Labor Day demonstrations between 1977 and 2010.

The party's deputy chairman and party spokesperson, Haluk Koc, said at a meeting of his party's top decision-making body Wednesday that those who attend May Day celebrations across the country should use common sense in the face of any provocation, and called on police to act responsibly.

He pointed out that during May Day celebrations held in Istanbul's Taksim Square in 2010, 2011 and 2012, no one has been harmed.

Rallies at the square were not permitted by the government last year due to extensive construction work. However, some unions insisted on marching, but were stopped by security officials.

The office of Istanbul's governor has said that Taksim Square would not be open to May Day demonstrations due to intelligence reports indicating that "illegal terrorist organizations" could provoke violence against security forces.

Taksim Square has remained closed to Labor Day protests in 1977 after 36 people died during riots which broke out after unidentified gunmen fired on a 500,000-strong crowd. It reopened in 2010.