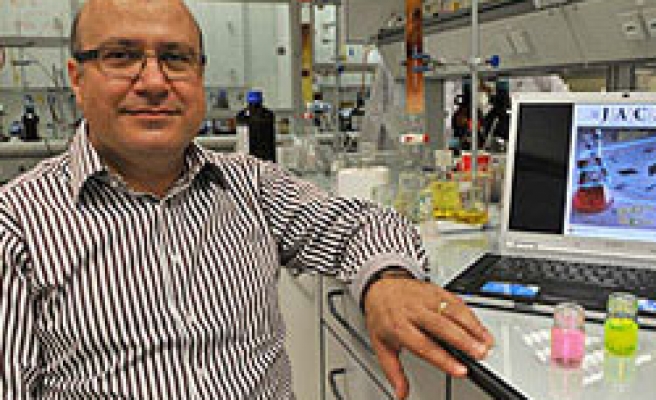 The invention is a milestone towards developing computers incorporating processors made of nano-molecules.

Professor Engin Umut Akkaya, a scholar at the Chemistry Department of the Bilkent University in Ankara, who won last year the Science Award of Turkey's Scientific and Technological Council-TUBITAK, said his years long research bore fruit and he succeeded in developing a series of molecules capable of sending meaningful optical data to the macroscopic world.

The molecules which process ions like zinc and cadmium as input, was entirely designed by his team, says Akkaya.

"This molecule is capable of producing light in various wave lengths (different colours). It can take chemical inputs to make arithmetic operations like subtraction and addition, and can produce both chemical and optical outputs" says Akkaya.

He says the 0.1 nano-cubic meter molecule which has fluorescence qualities can only make basic arithmetic operations for now, adding that in the future these molecules may make encryption and have wider areas of application.

The invention of the molecule was featured in the cover of the Journal of the American Chemical Society, one of the most prestigious publications in the field of chemistry.

The invention is a major step towards replacing silicon processors in computers with nano-molecules, says Akkaya, who underlines that the Journal published only seven articles from Turkey in its 132 year history, five of which were results of his lab research.

Last year TUBITAK, awarded Akkaya for his molecular synthesis work, an invention that is promising to enhance the efficacy of photo-dynamic therapy used in treatment of cancer.