Police and gendarmerie forces launched a major operation against marijuana farms in two towns in the southeastern province of Diyarbakır on Monday, a week after the construction of new security outposts sparked unrest in the province. 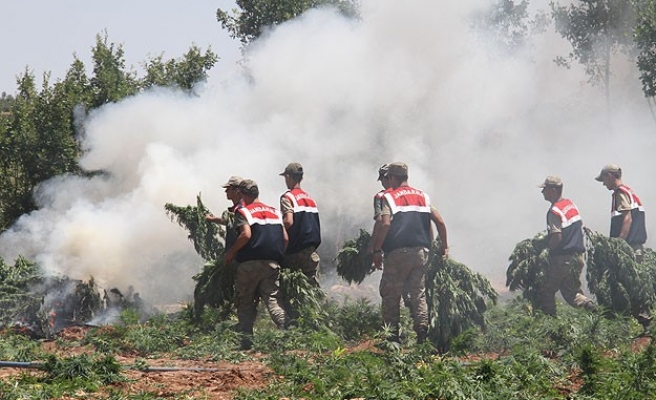 Police and gendarmerie forces launched a major operation against marijuana farms in two towns in the southeastern province of Diyarbakır on Monday, a week after the construction of new security outposts sparked unrest in the province.

On June 28 an 18-year-old was killed in a protest in Diyarbakır's Lice district, one of the locations of Monday's raids. The protesters were challenging the construction of a new military outpost. The Peace and Democracy Party (BDP) has long criticized the new outposts, saying they could undermine the ongoing settlement process between the Turkish government and the Kurdistan Workers' Party (PKK).

Prime Minister Recep Tayyip Erdoğan and other government officials defended the outpost, linking the protesters to drug traffickers angry over recent narcotics operations in the town, which is home to vast fields of marijuana -- an important source of income for the PKK.

Farms in Lice, along with Hazro, also a site of the raids on Monday, are important for the PKK's marijuana trade.

The Taraf daily on Monday published photographs showing vast fields of marijuana planted along major highways. Local villagers claim the marijuana farms only occur near security outposts and can't be found anywhere else.

Some area residents believe the state's passive stance on the marijuana farms implicates it in the drug trade.

Taraf quotes İdris Özbahçıvan of Lice: “It is true that some Lice residents make their living from drugs. But you have hundreds of hectares of plantations right where you have military outposts. The state is so silent that you wouldn't be surprised if soldiers came and started to use scythes at the plantations.”

Village residents of Kayacık, the site of the planned outpost, complain that although operations against trucks transporting marijuana do occur, the farms are rarely raided. They complain that children as young as 10 smoke marijuana, and many say they would like to see an effective war on the farms.

Until Monday, most successful security operations targeted trucks. On July 5, more than a ton of marijuana was seized in Batman in a major operation by the Batman Police Department's Anti-smuggling and Organized Crime Bureau. The marijuana seized was grown in Lice, according to police officials.

Adana province officials, however, claimed on Monday that the total area of marijuana fields in Adana's rural areas under gendarmerie jurisdiction had shrunk 80 percent since a government crackdown was launched. In a statement to the press, the province's gendarmerie commander, Col. Murat Koç, attributed the drop to security operations on the ground and in the air.