Turks traditionally visit family and friends in their hometowns during religious holidays. 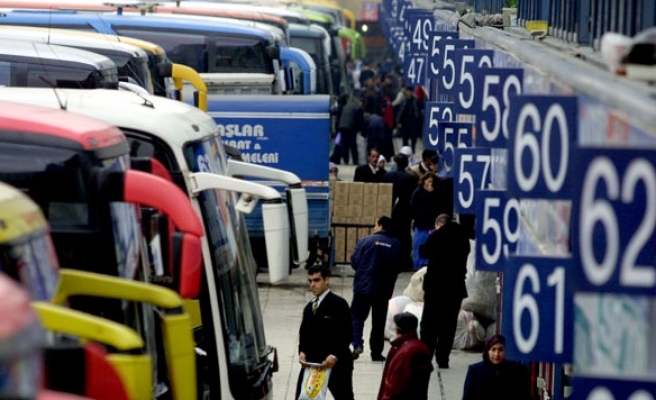 Turkey's airline and intercity transportation companies are enjoying a significant increase in the number of passengers with less than a week left until Eid al-Fitr, which the government has announced will last for nine days.

Turks traditionally visit family and friends in their hometowns during religious holidays. Traveling to holiday resorts is another popular option. The number of passengers to use airlines for their trips is expected to reach 1 million, while this number will hit 10 million during the nine-day eid holiday.

Companies had earlier announced additional flights and tours to meet the skyrocketing demand. Tour operators say bookings have jumped due to the fact that the start of the school year this year was delayed until after the eid holiday.

National flag carrier Turkish Airlines (THY) will take the lion's share from eid trips with 650,000 passengers, while private carriers are expected to fly an additional 350,000 passengers inside Turkey and abroad.

THY announced they have added 81 new flights, eight of them international, from Aug. 27 to Sept. 4. The company will fly to 187 different destinations.

Most Turks are expected to make domestic trips, while some prefer to spend the holiday abroad. Italy, Spain and the Balkan countries come first among the most popular destinations for this year's eid holiday.

Turkey Private Sector Aviation Operators Association (TÖSHİD) executive board member Şahabettin Bolukçu told Cihan news agency Wednesday in İstanbul that they increased their passenger capacity by 15 percent prior to eid. "We decided to use relatively larger planes from our fleet for this holiday.

The Atatürk Airport authorities would not allow us to add new flights due to heavy traffic," he noted. Also the general manager of private carrier Onur Air, Bolukçu said the company is able to offer 3,000 additional seats during the holiday. Onur Air is expected to carry 110,000 passengers during the eid with their occupancy rate reaching 95 percent.

Another private carrier, Atlasjet, will fly to Dalaman, Bodrum, İzmir and Antalya everyday during the eid. Company officials told Cihan news agency passenger traffic would increase, particularly after Aug. 26. The carrier's most preferred foreign destinations are Rome, Cologne and Barcelona.

Pegasus Airlines will fly to 19 domestic and 28 international destinations during the eid holiday. The company has announced 300 additional flights for this holiday. Pegasus officials said private carriers could easily exceed 350,000 passengers, adding most customers planned their holidays for no less than one week.

Sunexpress flies to 15 domestic and 30 international destinations during the holiday. The company said 90 percent of seats were already booked, and the most preferred foreign destinations were Germany, the Netherlands and Austria, while most domestic trips will be to Antalya, İzmir, Trabzon and Gaziantep.

Mehmet Erdoğan, president of the Coacher Federation of Turkey (TOFED) said intercity transportation companies expect an increase in demand until the end of the eid holiday, adding this increase would continue through the end of September. "We are expecting that the beginning of the school season will increase passenger traffic. Some 500,000 people will use buses per day during September."