The welcoming ceremony was attended by Prime Minister Abdiweli Sheikh Ahmed as well as a host of other senior government officials. 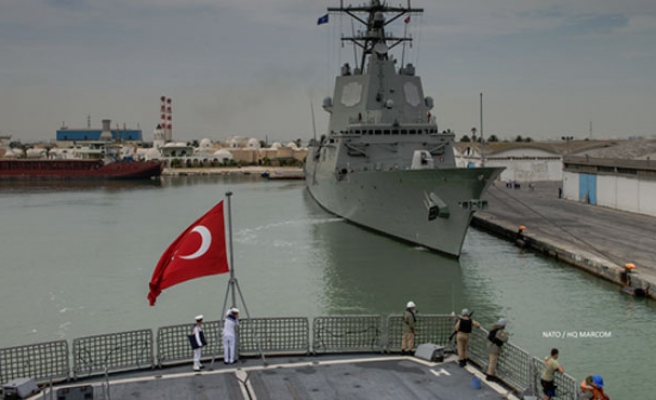 Four Turkish warships on Thursday docked at the Port of Mogadishu on one-day visit to Somalia as part of its current African tour on the Indian Ocean coastline.

"Turkey has shown remarkable support to Somalia during a time where the world seemed to have forgotten about us,” Mohamoud told a press conference on board of TCG Gediz frigate.

"The friendship and support Turkey has shown is something that will be forever cherished."

Turkish Ambassador to Somalia Kani Torun, for his part, said Turkey would continue to offer aid to Somalia through Turkish agencies.

He said these agencies work day and night in Mogadishu and other Somali provinces with the aim of offering aid to the people of Somalia.

At the end of the conference, the Turkish navy offered a shipment of medical aid dedicated to the Somali people.

The welcoming ceremony was attended by Prime Minister Abdiweli Sheikh Ahmed as well as a host of other senior government officials.

The Task Group comprises of two frigates, a corvette and a replenishment tanker.

The Turkish warships are on a 102-day tour, which will cover 15,000 nautical miles and include 27 countries. It is scheduled to wrap up on June 27.

The warships passed by the Cape of Good Hope earlier in May for the first time in nearly 150 years.

The Turkish navy last crossed the Cape of Good Hope 148 years ago with two Ottoman corvettes, which were in charge of guarding Ottoman pilgrims.

Since then the Suez Canal has been the preferred route.