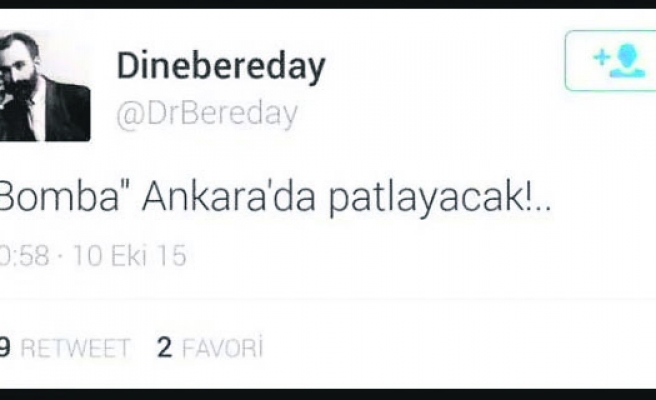 Two members of the PKK terrorist group were arrested Wednesday over tweets posted before Saturday’s Ankara bomb attack saying the city would be attacked, a security official said.

According to the official, who spoke under customary condition of anonymity, the suspects are linked to a Twitter account that sent the message "Bomb will explode in Ankara" nine hours before the explosions that killed at least 97 people gathering for a peace rally.

The official identified the men as Erhan O. and Mehmet P. and claimed they were behind an account named DrBereday, which also tweeted messages such as “What if ISIL blows up?!” and warned there could be an "intervention" at the rally by ISIL.

According to the source, Erhan O. was born in the southeastern city of Diyarbakir. He is said to have taken part in PKK attacks and been arrested twice before.

He accessed the account using a mobile phone registering in the name of a family member, the source added. The relevance of the name of the account, which had been active from 2012 until it was deactivated Saturday, was not immediately clear.

Mehmet P. is said to have been born in Suruc, Sanliurfa province, and is alleged to have worked online for the PKK terror organization.

According to the source, he was arrested on May 13 in Sanliurfa province in an operation where explosives were seized. He is said to have been held in custody between 2013 and 2014 and received explosives training in Syria.

The source also claimed he tried to stand as a candidate in the June 7 general election but failed to be nominated by a party.

The arrests were carried out after Twitter shared details about the account’s Internet protocol.

Saturday’s bomb attack came as Turkey is embroiled in a conflict with the PKK in the southeast and faces threats on its southern border from ISIL.

Prime Minister Ahmet Davutoglu has identified ISIL as the group most likely to be behind the attack. ISIL has been implicated in the June 5 bomb attack on a political rally in Diyarbakir that killed four as well as the July 20 Suruc suicide bombing that killed 33 young activists.