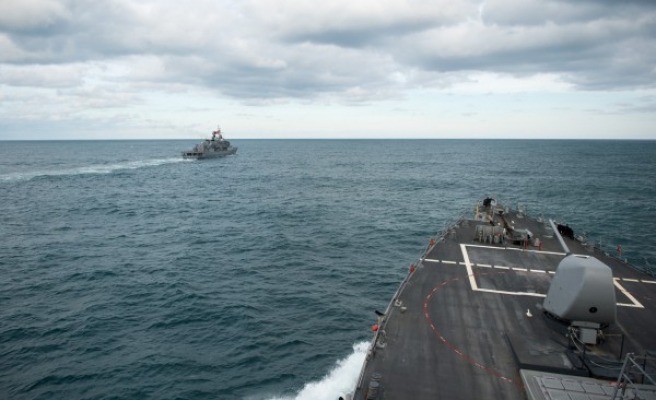 The U.S. Navy’s guided-missile destroyer USS Donald Cook recently completed a joint exercise with Turkish naval forces in the Mediterranean and Anadolu Agency was invited aboard as it lay moored off southern Turkey.

The destroyer -- named after a U.S. marine who died in captivity during the Vietnam War -- is to continue operating close to Turkish waters for at least the next few weeks.

“We are here because the U.S. and Turkey are very close allies,” Cmdr. Tim Moore, the ship’s second-in-command, told Anadolu Agency on Friday.

“This is an excellent opportunity for our two nations to stand together to promote peace and stability in the region.”

The eastern Mediterranean has emerged as one of the world’s leading trouble spots over the last five years.

In addition to the four-and-half-year conflict in Syria that has drawn in the West, Russia and a host of regional powers such as Turkey, Saudi Arabia and Iran, there has been a rise in violence in the Palestinian territories in recent weeks following Israel’s bombardment of Gaza last year.

Meanwhile, Egypt’s Sinai Peninsula has been witnessing low-intensity insurgency against the state since mid-2013 when the country’s first democratically elected president was removed in a military coup.

Later this month, the southern Turkish city of Antalya will host world leaders for the G20 summit, with the conflict in Syria and the resulting refugee crisis facing Europe likely to be near the top of the agenda.

However, Moore denied the destroyer’s mission was connected to either the summit or the conflict in Syria.

“Our current operation is to support the exercise,” he said in an interview conducted aboard the ship as it lay just off-shore from Antalya.

Commenting on the mission, Moore added: “The cooperation between our two nations was very sound, very solid. The differences in our navies were discussed and we worked together to reach a common goal during this exercise.”

The destroyer, which is usually based on Spain’s Atlantic coast, would be in the eastern Mediterranean for an “undisclosed amount of time”, he said.

Since the U.S. and Germany announced they would pull their Patriot anti-missile batteries out of southern Turkey, where they were acting as a NATO deterrent to an attack from Syrian territory, the U.S. has stressed the value of Aegis-equipped ships to do the same job.

“You will always have a destroyer in the eastern Mediterranean,” Moore said. “There will always be one of these ships promoting peace and stability in the region.”

According to the U.S. Navy’s website, the Aegis system is capable of tracking missile threats from air, sea and land and knocking out the missiles with SM-2 or SM-3 interceptor missiles.

“We are underway supporting U.S. objectives now but also we are working with our allies always,” Moore said. “We are always here helping our friends.”

In April last year, the ship was tested when a Russian Su-24 fighter made repeated low-level passes near the destroyer in the western Black Sea while another Russian jet circled overhead. Speaking at the time, Pentagon spokesman Col. Steve Warren said: “The Donald Cook is more than capable of defending itself against two Su-24s.”

Asked about the ship’s reaction to any future threat, Moore told Anadolu Agency: “We are always ready to defend the ship in any instance if we feel provoked. We are ready to defend ourselves and our friends.”

The Donald Cook, which fired the first Tomahawk missile of the 2003 Iraq invasion, was commissioned in 1998 and has a crew of more than 300, a third of who are women.

Tanju Bilgic, a spokesman for the Turkish Foreign Ministry, said last week that the Donald Cook and other U.S. ships would “continue their permanent existence in the eastern Mediterranean as part of support for our country’s defense”.