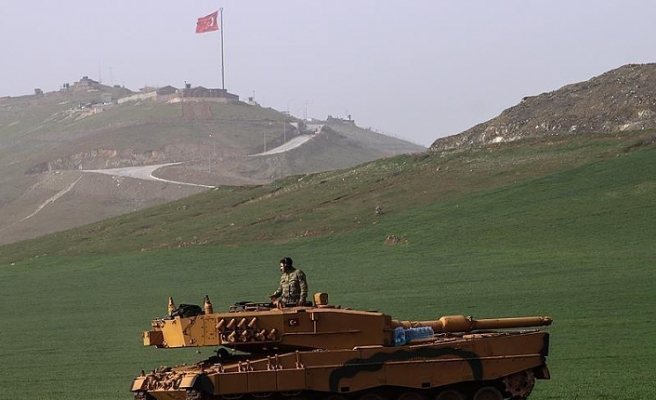 The YPG/PKK terror group continues to pose a threat to Turkish territories using the internal conflict in Syria as an opportunity. The terrorist organization, which occupied a 480-kilometer (298 miles) of land on Turkey-Syria border, recently increased its activities against Turkey.

In the last three years, Turkey came under many harassment fires by the terrorists.

Their efforts to carry out terror activities inside Turkey have been prevented by successful operations of security forces, who seized large amounts of explosives in border cities such as Hatay, Kilis, Gaziantep, Mardin and Sanliurfa

The Operation Olive Branch, which was conducted by Turkish Armed Forces in Afrin, ended the terror group YPG/PKK’s presence in northwestern Syria.

The terrorists targeting civilians in Hatay and Kilis provinces killed seven people, while injuring 113 others by rockets and mortars they fired as Turkey started operation in the region.

During the operation, terrorists carried out rocket and mortar attacks 60 times on Hatay, and 34 times on Kilis.

The terrorists also targeted a mosque in Kilis, and caused the death of two civilians.

Many houses, vehicles and shops were damaged in the residential areas in the two provinces, which came under the terror attacks.

In 2015-2017, the YPG/PKK conducted 12 attacks on border posts in Hatay and Kilis, and martyred two soldiers, and injured another.

In April 2017, the terrorists attacked a tank with a howitzer in Sanliurfa province. Turkish forces responded the attack, which caused no loss of lives.

In January 2018, the terrorists also targeted border posts in Mardin’s Nusaybin district with harassment fires for two days in a row. No loss was reported in the attacks.

Plans to drown cities in blood

Eight Syrian suspects carrying 146 kilograms (321 pounds) of explosives were captured as they tried to enter Turkey from the YPG/PKK-occupied region of Syria in July 2017.

One of the terrorists confessed in his testimony that they had buried some of the explosives in soil after covering them with powdered chili pepper to prevent detector dogs from finding them.

In August 2018, security forces seized 25 kilograms (55 pounds) of explosives from a vehicle travelling from Hatay to Gaziantep. More explosives of 5 kilograms (11 pounds) were also found in a raid at homes of the terrorists.

Last month, a terrorist, who entered Turkey from YPG/PKK-controlled Tal Abyad region and learned to have been trained to be a suicide bomber, was captured in Gaziantep.

Over 247 kilograms (544 pounds) of explosives were also seized from a vehicle during controls in Mardin province. The terrorists, who brought the explosives into Turkey, were preparing to carry out attacks in metropolitan cities of the country.