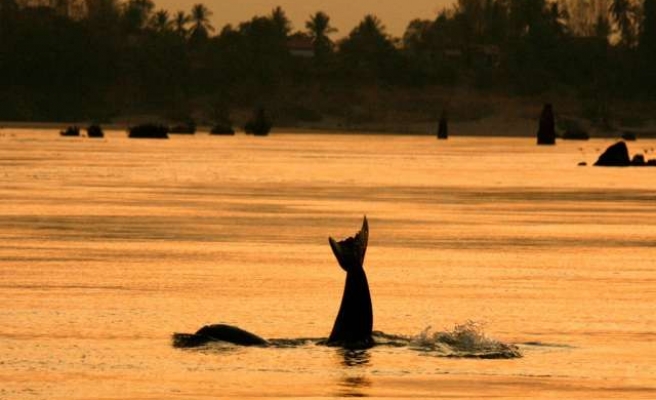 The stallholder held up the three middle fingers of his right hand to show that a dried square of the Asian elephant flesh laid out before him was available for 300 Chinese Yuan - roughly US$50.

All around, other stalls in the Mong La market on Myanmar's border with China were laden with ivory, tiger pelts, dried bear bladders, thick scaly pangolin skins and a multitude of horns, antlers and teeth torn from a host of animals.

Many are smuggled from the rich jungles of the surrounding Greater Mekong region, where conservationists warn that new species are under threat from economic expansion, deforestation and poaching, and for sale in places like Mong La before they’ve even been registered by mankind.

The World Wide Fund for Nature (WWF)’s latest report, Mysterious Mekong, compiles 367 new species identified by scientists in the region, named after a river that runs through China’s south-western Yunnan province and on through Southeast Asia.

It is an area that is teeming with biodiversity, and has been described by the WWF as “the frontline for scientific exploration” of new species that in 2012-2013 included a giant flying squirrel, a lizard with zebra-like markings and a fish that mates head-to-head.

In Myanmar, a country that only recently began to open its economy following five decades of harsh military rule, scientists discovered 26 new finds. Among them were seven new kinds of fish, including a dragonfish that has “striking and complex” maze-like markings on each scale.

The report also said that four new amphibians were discovered in the country, including a stream toad with bumpy, brown skin and long, slender limbs.

Myanmar’s wilderness is among the most pristine and diverse in the world, and Dr. Khin Ni Ni Thein, WWF’s director for the country, believes there are “potentially thousands” of undiscovered plants, animals and insects in the country just waiting to be found.

Eased travel restrictions and a more permissive government mean that the country is now likely to see more explorers venturing into Myanmar’s forests, oceans and rivers to document the life there.

But the same reformist government behind the new freedoms is also opening its doors to investors looking to exploit a vast wealth of natural resources that include teak wood and precious gems.

That puts Myanmar under the same economic pressures that its Mekong delta neighbors - such as Thailand and Cambodia - have faced for some time. Myanmar WWF director Khin Ni Ni Thein said the need for conservation was “urgent
especially here in Myanmar.”

The recently discovered Sawtooth-necked Bronzeback, native to Myanmar and neighboring Thailand, is named as one example of a newly discovered species under threat.

WWF says the snake, which measures up to one and a half meters and dwells in hilly evergreen forests, is at risk from “habitat destruction.”

In Mong La - a region run by rebels and nestled at the intersection between Myanmar, Thailand, Laos and China - it is all too clear that vast areas of forest are fair game for poachers and smugglers.

Shoppers flock to the illegal wildlife market to purchase the rich poachings - many in the belief that they have special medicinal properties.

Tiger skin is believed to help with mental illness, teeth are used to cure rabies, asthma and sores on the penis, bears' gall bladders are used for a variety of ailments, including diabetes, while powered rhino horn is used as both medicine and aphrodisiac.

The region's unelected rebel government, which struck a ceasefire deal with Myanmar’s rulers in 1989 that allowed it autonomy over this small stretch of jungle-covered borderland, does nothing to halt the open illegal wildlife trading in its territory.

This is none more apparent than outside the restaurants a short walk from the wildlife market, where on a recent visit the Anadolu Agency saw a large bird of prey blinking at passers-by from a tiny wire cage, apparently waiting to be selected by an extravagant diner.

The fact that Mong La remains out of reach of reforms is not the only reason to fear for wildlife in the new Myanmar, where the latest discoveries also include a catfish and a ginger plant collected from the cloud forests of western Rakhine state.

Many environmentalists remain skeptical about the ability and will of Myanmar’s government to implement change.

Corruption is widespread, with members of the Myanmar Army, for example, alleged to tax truckers carrying timber from illegally deforested sites.

But WWF, which opened a new office in the country this year, has stopped short of criticizing the government outright, hoping that a policy of engagement will yield better results.

“The government has made commitments to sustainable development and developing a green economy,” said Poston.

“Our goal is to support those efforts.”