The Public Prosecutor in Pará state, which accounts for a large area of Amazon rainforest, tells the Anadolu Agency that deforestation has been reduced to zero in areas where an operation targeting key business figures behind illegal logging netted critical arrests. 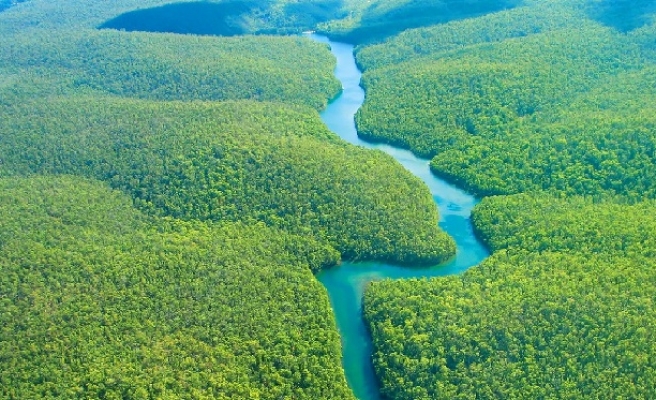 A sharp reduction in deforestation in the northern Brazilian state of Pará has been reported following the arrests of key figures linked to illegal logging businesses, the state public prosecutor told the Anadolu Agency (AA) on Wednesday.

Operation Chestnut Tree began in late August, and has sought to apprehend central gang members behind illegal logging operations, including so-called "grileiros," or land-grabbers, who forge land ownership documents, clear and sell on areas of forest and chemically treat it for farming uses.

The investigation is part of a coordinated crackdown on illegal logging operations that has seen arrests in four states, including Mato Grosso and São Paulo.

The Pará public prosecutor told AA that eight key figures that championed the destruction of the Amazon rainforest region have been arrested and remanded in custody so far in the state alone, but six others were still sought and the joint operation is set to issue warrants for further arrests. Additional detentions have been made in the other states involved.

This week the public prosecutor requested recent deforestation data for the state from the Brazilian Environmental Institute (Ibama), which monitors and inspects the sensitive rainforest region, and the results showed a marked decline.

"The operation started on Aug. 27, when the rate of deforestation was over 3,400 hectares [13.1 square miles] a week. The week after the arrests, the number fell to under 900 hectares, and in the first week of September, 'Deter' recorded zero deforestation - an extremely rare event," the public prosecutor's office said in a statement.

"Deter" (Deforestation in Real Time) is a satellite monitoring system that alerts authorities when visible deforestation has occurred, although the system has been circumvented by loggers selectively cutting trees that do not disrupt the canopy - which is harder to detect by satellite.

Officials say achieving zero deforestation is particularly impressive given the fact that the Amazon is in a season when the rate of logging is usually high.

Although the arrests appear to have disrupted local illegal logging activities, the public prosecutor and other bodies working on the investigation, including Ibama and the federal police, warn that other gangs remain to be tackled.

The arrest warrants issued by the state are passed on to Interpol and the federal police - which runs airport immigration - to ensure those wanted do not flee the country.

One of those wanted in connection with illegal logging is a real estate manager from Paraná state, located more than 1,600 kilometers (1,000 miles) to the south of Pará state, who led negotiations for the cleared plots of lands without stepping foot in the Amazon.

Police say the land has been principally sold on to farmers wanting to graze beef cattle or plant soy, and that farm plots were being negotiated for as much as 20 million reais (US$8.7 million).

If convicted, they could face jail sentences of more than 50 years, although the maximum length that can be served is 30 years according to Brazilian law.

Environmentalists have cautiously welcomed news of the arrests and the eduction in deforestation, but warn that the operations alone are unlikely to succeed.

"Although the operation was an important step for accountability in a precarious region, most of those operations fail to achieve further results than this. Brazil is well known for its impunity," Maíra Irigaray, Brazil Program Coordinator for the environmental organization Amazon Watch, told the Anadolu Agency.

"[Brazilian] laws are strong in terms of environmental protection, but what is lacking most of the time is enforcement. The states of Pará and Mato Grosso have a key role to play, considering all the soy, cattle and political money behind the illegal logging mafia," she says.

The environmental activist says halting deforestation in the region and further protecting the Amazon is key to solving climate change, which she says is "one of the biggest issues humanity now faces."

Despite the key arrests, recent statistics have shown that there is no room for complacency. Brazil has been forced to admit the rate of deforestation in the Amazon increased by 28 percent between August 2012 and July 2013, after a years-long downward trend.

In 2009, lawmakers committed to reducing Amazon deforestation by 80 percent by 2020, but they also face the challenge of preserving the most biodiverse area of land on the planet, while satisfying growing demands at home and abroad for Brazilian beef and soy. Ruralista politicians also remain a powerful force in government.

Environmentalists have voiced their disquiet over the decision to end the so-called "soy moratorium," which bans the trading of soya produced on recently-deforested Amazon land, on Dec. 31, although the government argues that a robust legal framework is in place that can adequately replace the moratorium.

Brazil is home to the biggest area of Amazon rainforest, which spans nine countries and represents half the planet’s remaining tropical forests. The area is also home to 10 percent of all species on the planet.