The study, published in the American Journal of Sports Medicine, looked at the effects of "lace-up" ankle braces, which are made of synthetic fabric and secured with Velcro. 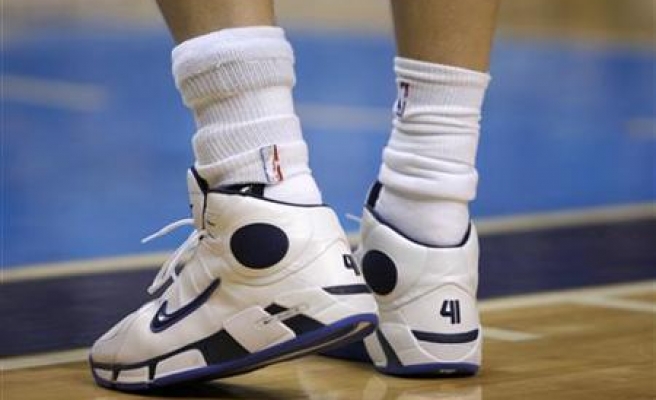 The ankle braces many basketball players strap on to prevent injuries may actually work, a study of high school players suggests.

Researchers found that of the nearly 1,500 basketball players they followed for a season, those who were assigned to wear ankle braces during practice and games were 68 percent less likely to suffer an ankle sprain or fracture.

The study, published in the American Journal of Sports Medicine, looked at the effects of "lace-up" ankle braces, which are made of synthetic fabric and secured with Velcro.

They are widely used in basketball, where ankle injuries are the most common type of injury. But there has been scant evidence that they actually work, especially on high school players.

"There are advertising claims that they'll do wonderful things," said Timothy A. McGuine, a researcher at the University of Wisconsin-Madison who led the new study.

On the other hand, he told Reuters Health, there have been concerns that limiting the ankles' mobility with a brace could set basketball players up for knee injuries, including tears of the anterior cruciate ligament (ACL).

The ACL, which connects the thigh and shin bones, is often torn when the knee suddenly twists but the foot stays planted in place.

But in their study, McGuine and his colleagues found no evidence of higher knee injury risks.

Of the 740 players randomly assigned to wear lace-up ankle braces, 27 suffered an ankle sprain or fracture over one basketball season.

In contrast, there were 78 ankle injuries among the 720 teenagers who played and practiced brace-free.

That translated into an injury rate of just under 0.5 for every 1,000 practice sessions and games in the brace group. The rate in the brace-free group was about three times higher, at 1.4 per 1,000.

There was no significant difference, though, in the two groups' risk for knee injuries; there were 15 in the brace group and 13 in the comparison group.

It's likely, McGuine said, that the softer, flexible lace-up brace does not put the knee at risk in the way that a semi-rigid plastic brace might.

"Ankle braces could be a cost-effective way to prevent ankle injuries in basketball players," McGuine said. "But they're not a panacea."

They also do not seem to reduce the severity of ankle injuries when they do occur. McGuine's team found that injured players in both groups needed the same recovery time -- about a week.

Once the ankle "goes," McGuine said, a brace may not do anything to limit the severity of the injury.

There are also other ways to reduce basketball players' ankle injury risk. Studies have found, for instance, that training regimens focused on balance, coordination and jumping technique seem to cut ankle injuries to the same degree that braces did in this study.

Of course, training programs are much more involved than strapping on a brace.

But, McGuine said, "the advantage of training is that it also seems to reduce the risk of knee injuries."

It may be that a combination of training and ankle bracing is best, according to the researchers.

An estimated 1 million U.S. high school students play basketball. When they suffer ankle injuries, their risk of further injuries to the same joint and possibly their risk of arthritis later in life go up.

"The more we can do to prevent these injuries in kids, the more we'll save in healthcare costs in the long run," McGuine noted.

The braces used in the study, made by McDavid Inc., cost about $35 each.

The study was funded by the University of Wisconsin and none of the researchers reports any connection to the brace manufacturer. McGuine has received speaker fees from another sports-product company, Mueller Sports Medicine Inc.