Cambodia urged to act on plans to reintroduce tigers 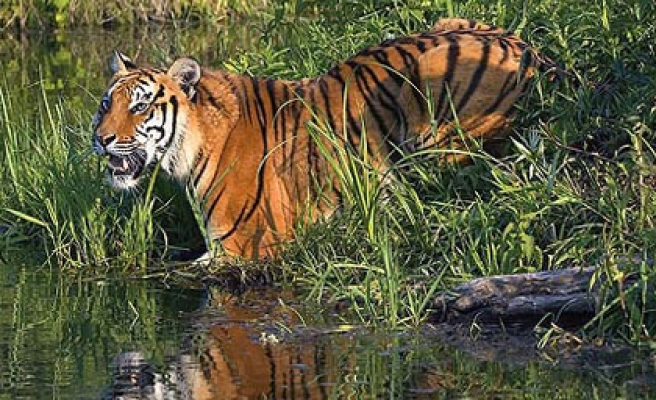 The Cambodian arm of the World Wildlife Fund has called on the government to move forward with plans to reintroduce wild tigers in the country’s eastern forests, but reiterated concerns over possible development in the area.

Wednesday marks Global Tiger Day, which seeks to highlight the worrying circumstances wild tigers find themselves in. There are an estimated 3,200 left in the world.

Globally, the reintroduction plan is part of a wider effort to double the number of wild tiger numbers.

The last documented and confirmed tiger sighting in Cambodia was in 2007, captured on a camera trap set up in the Mondulkiri Protected Forest.

In January, a proposal drafted by the Department of Wildlife and Biodiversity and titled the "Cambodia Tiger Action Plan", was sent in to the Ministry of Agriculture, Forestry and Fisheries, but it has yet to be finalized by the government.

Since then, the Cambodian and Indian governments have been in talks about the possibility of India donating tiger cubs to Cambodia in a bid to help with the proposed reintroduction of the species.

"We believe that the habitat and prey base can support tiger reintroduction in Mondulkiri Protected Forest in the Eastern Plains Landscape," said Chhith Sam Ath, country director of WWF Cambodia, in a statement.

"But we need to make sure that no development takes place within protected areas such as Mondulkiri -- especially a planned border crossing and road that would hurt the chances of successful tiger reintroduction."

In an interview with Anadolu Agency in March, WWF’s director-general Marco Lambertini said he could envision Cambodia as a leading innovator in tiger-reintroduction programs, and referred to the global estimate of tiger numbers as an "historic minimum".

He said the ultimate aim of the program would be to make tigers in Cambodia a "permanent functional population".

But he too expressed concern about possible plans for a road and border crossing to be built in the protected area, saying that such a move would thwart the success of the potential program.

Un Chakrey, WWF’s communications manager, told Anadolu Agency by telephone Wednesday that the plan could come to fruition by 2020, but that it still depends on final approval from the government, which has yet to be given.

He said the aim of the statement was to "influence the decision" and speed up the process. According to a pledge signed by Cambodia and 12 other "tiger range" countries, the aim is to have the programs fully realized by 2022.

Contacted by Anadolu Agency on Wednesday, Keo Omalis, chief of the forestry administration’s department of wildlife and biodiversity, referred questions to fellow department official Mak Sophal, who could not be reached.