Researchers have shown for the first time that a single intravenous infusion of a genetically engineered virus can home in on cancer, killing tumor cells in patients without harming healthy tissue. 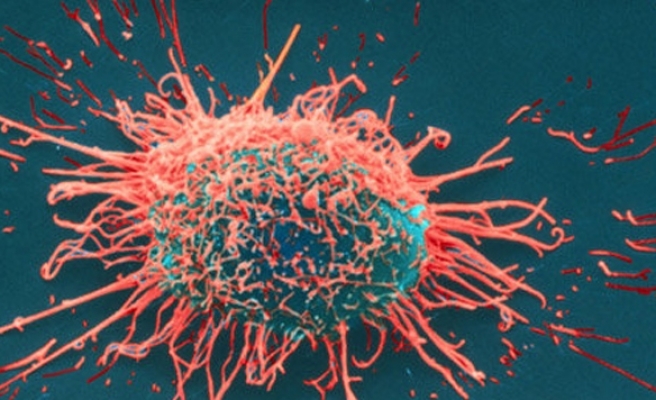 Researchers have shown for the first time that a single intravenous infusion of a genetically engineered virus can home in on cancer, killing tumor cells in patients without harming healthy tissue.

Scientists have been intrigued for decades with the idea of using viruses to alert the immune system to seek and destroy cancerous cells. That interest has taken off in recent years as advances in genetic engineering allow them to customize viruses that target tumors.

The field received a boost in January when biotech giant Amgen Inc agreed to pay up to $1 billion for BioVex, the developer of experimental cancer-fighting virus OncoVex. But the only "oncolytic virus" so far approved by a regulatory agency is for treatment of head and neck cancer in China.

In a study published in the journal Nature on Wednesday, scientists at institutions including the University of Ottawa and privately held biotech company Jennerex Inc said a small, early-stage trial of experimental viral therapy JX-954 found that it consistently infected tumors with only minimal and temporary side effects.

The experimental virus will next be tested in a mid-stage trial of patients with liver cancer.

"With chemotherapy you get drastic side effects," said Dr. John Bell, chief scientific officer at Jennerex and senior scientist at the Ottawa Hospital Research Institute. "Patients on this treatment only had 24-hour flu symptoms, and nothing after that."

The trial, which involved 23 patients with various types of advanced cancer, was designed to assess the safety of JX-954. It also found that six of the eight patients given the two highest doses saw their tumors stabilize or shrink.

Seven patients in that group, or 87 percent, had evidence of viral replication in their tumors, but not in normal tissues.

Dr. Bell said the next step is a Phase 2b trial of the viral therapy in 120 patients with primary liver cancer, known as hepatocellular carcinoma.

He said earlier trials of JX-954 showed really strong activity in liver cancer. Since some kinds of liver cancer are caused by viruses -- like hepatitis B -- the theory is that those tumor cells may be more susceptible to a second virus.

JX-954 is derived from a strain of the virus once commonly used to vaccinate children against smallpox.

"We know it is pretty safe," Dr. Bell said, noting that genetic information needed for the virus to mutate has been deleted from JX-954.

He also said that because the Jennerex virus can be given intravenously, spreading throughout the body, it may hold promise for limiting the ability of cancer cells to metastasize and spread.

Other viral cancer therapies are also progressing in clinical trials, but they either require direct injection into the tumor or accompany chemotherapy. Results from a Phase 3 melanoma trial of Amgen's OncoVex, which is directly injected into tumors, are expected next year.

Oncolytics Biotech Inc is conducting a pivotal trial of its experimental virus, Reolysin, in combination with chemotherapy for patients with head and neck cancer.

"We are all competing against standard of care," said Matt Coffey, chief operating officer at Oncolytics Biotech.

Jennerex is primarily funded by investors from Canada and South Korea. European rights to JX-954 have been licensed to Transgene. Other regional licenses are held by Lee's Pharmaceutical Ltd for China and Green Cross Corp for South Korea. Jennerex has not licensed rights in the United States or Japan.