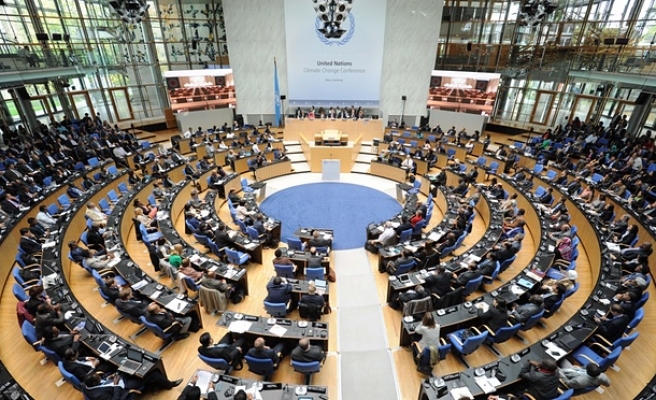 Crunch climate negotiations opened in Bonn Monday with a UN official urging countries to replenish coffers for the critical Paris conference tasked with sealing a global carbon-curbing pact in December.

UN climate chief Christiana Figueres told delegates there was a deficit of 1.2 million euros ($1.3 million) for the November 30-December 11 UN Conference of Parties (COP 21) as well as the final pre-Paris negotiating round in Bonn in October.

"I regret to inform you that we have a deficit now of 1.2 million euros just to cover the sessions you have in your calendar," she told delegates.

She asked "parties in a position to do so, to please contribute."

Diplomats gathered in the former West German capital for the penultimate round of official negotiations to craft a workable draft of the deal that must be inked by 195 nations in just over three months.

Due to take effect in 2020, it will be the first agreement to commit all nations to reducing planet-harming greenhouse gas emissions in pursuit of the UN goal to limit average global warming to two degrees Celsius (3.6 degrees Fahrenheit) over pre-Industrial Revolution levels.

Including this week's talks in Bonn, there are just 10 official negotiating days left to refine the draft pact.

Currently, it is an 83-page laundry list of contradictory proposals for dealing with the climate crisis -- sometimes with as many as 11 options listed per item.

At the opening session, negotiators set themselves the task of producing a more concise version for political leaders who will ultimately make the concessions required to make the pact a reality.

But the disagreements are fundamental and deep-rooted.

Countries differ on how to divvy out responsibility for carbon cuts between rich nations -- which have polluted for much longer -- and developing countries, which need to power fast-growing populations and economies.

And developing nations are insisting that rich nations show how they intend keeping a promise made at the Copenhagen climate conference in 2009, which failed to produce a pact, of $100 billion (89 billion euros) in climate finance per year from 2020.

Now money worries is also putting pressure on the negotiations themselves.

"In addition to that we're still in deficit of 300,000 euros for the meeting itself, for October," she said.

South Africa's representative at the talks Nozipho Mxakato-Diseko said many developing countries were "handicapped" at the talks "due to being under-represented" for lack of funds.

Negotiators pointed out that time was running out for the near decade-long bid for a universal climate rescue pact.

"We do not have much time left," said the representative from Dominica, the tiny Caribbean island nation hit by tropical storm Erika over the weekend, killing at least 20 people.

"TOO LATE FOR SOME"

"Many people are dead. Many are missing. Roads, bridges and houses are destroyed. Once again, one of us -- the developing countries -- the countries that did not generate climate change, the countries that are doing the most to reduce emissions, is standing here to call the attention on a tragedy that could have been avoided," he said.

The Paris pact will be supported by a roster of national emissions-curbing pledges, but scientists warn that based on the voluntary submissions so far, the world is on track for warming way above 2 degrees Celsius -- a recipe for ever more extreme droughts and floods, disease spread and rising sea levels.