Ebola is 'the enemy you can't see': Doctor

Medical workers risking their lives to fight Ebola in West Africa talk about the challenges they face. 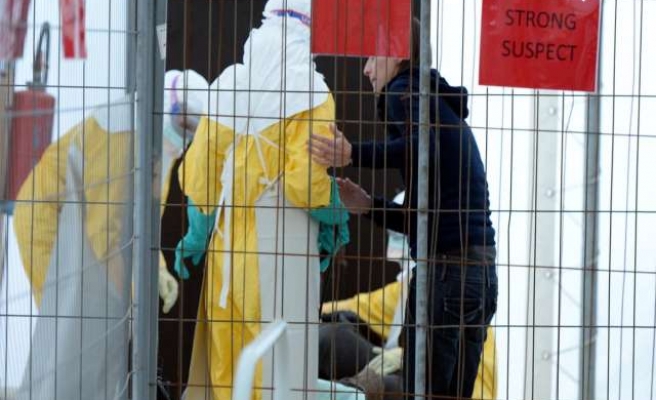 When a mob of patients infected with the Ebola virus stormed the health center in Liberia in early August, aid worker Brett Adamson had to turn some of them away.

Adamson's resources were limited; he could not treat them all.

''It was hard to know how many patients would fit inside, patients were letting other patients in,'' Adamson, an Australian aid worker for Medecins Sans Frontieres  told The Anadolu Agency. ''There were people dying outside, people were waiting in ambulances for 24 hours.''

''We didn’t have time to prepare and then we were full very very quickly,'' Adamson said. ''Soon we didn’t have any space to put the patients, so we had 120 patients within six days.''

Months after returning from the Liberian capital of Monrovia, Adamson is providing training in Brussels for volunteers ready to combat Ebola in West Africa.

Susan Shepherd, a doctor from New Jersey, who was receiving training with the MSF in Brussels before leaving for Sierra Leone – one of the countries worst hit by Ebola— told AA that she wants a more important response to the epidemic in West Africa.

''Unless people respond to this epidemic it’s not going to stop,'' Dr. Shepherd said. ''If this epidemic is not controlled where it is now, it’s going to keep on spreading.''

Although Ebola is a disease that’s not easy to contract, it’s the threat that we can’t see coming, according to Dr. Shepherd.

''You can see somebody with a machine gun at a hundred meters but the Ebola is the enemy that is always lurking and you can’t see it,'' she said.

Rob D’hondt, a water and sanitation engineer volunteering for MSF, returned to Brussels from Monrovia about a month ago, said locals in West Africa are afraid of aid workers when they wear their Ebola protection gear.

''If you arrive somewhere in the community you never arrive fully dressed in a Personal Protective Equipment suit, you arrive as a normal human being,'' D’hondt told AA.

The suit  includes protective clothing, helmets and goggles, which medical workers use as safeguards when treating Ebola patients.

D’hondt said medical workers have to interact with the locals first, and cannot put on their protective suit unless the locals agree with them.

''You’re re-penetrating deep into the lives of other people and you have to be conscious about what you’re doing,'' D’hondt said. ''It’s important to be transparent.''

There is a spiritual practice in for example Liberia, which makes people lay their hands on sick people, according to Brett Adamson.

He said one of the anthropological challenges to fighting Ebola is to tell people: ''you’re not allowed to care for your dying loved one.''

Medical workers face massive challenges when they enter in their protective gear and tell the locals: ''you can’t care for them, we will,'' Adamson said.

''That’s of course when you don’t have space to put people, and you have to say you can’t care for your loved one, but we can't either: They’re going to die outside,'' Adamson said. ''This has scarred a lot of people for a long time.''

The European Union's Ebola chief has called for more medical help on the ground to fight the deadly Ebola virus. Unfortunately, most of the money pledged to fight the disease has yet to be materialized.

Most of the €1 billion ($1.25 billion) which the EU pledged in late October to give in humanitarian aid, has not yet been received by aid agencies working in the countries worst-hit by the Ebola crisis.

The disease has killed at least 4,877 people since the beginning of February this year, with poor countries like Liberia, Sierra Leone and Guinea getting the worst of it with more than 1,012 cases confirmed to date.