The Ebola outbreak in West Africa has taken 1,552 lives out of 3,069 known cases in four countries and "continues to accelerate", WHO said 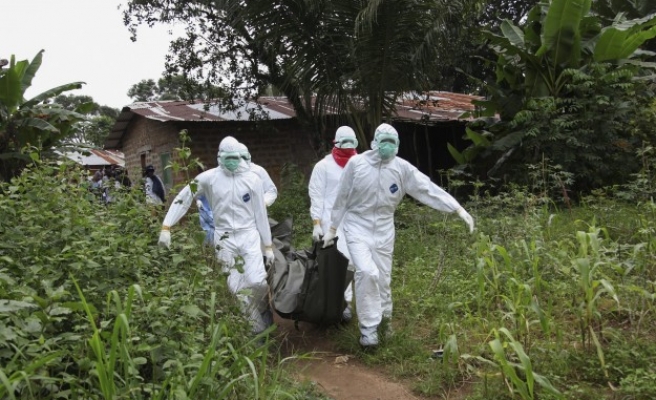 The Ebola epidemic in West Africa could infect over 20,000 people and spread to more countries, the U.N. health agency said on Thursday, warning that an international effort costing almost half a billion dollars is needed to overcome the outbreak.

The World Health Organisation (WHO) announced a $490 million strategic plan to contain the epidemic over the next nine months, saying it was based on a projection that the virus could spread to 10 further countries beyond the four now affected - Guinea, Liberia, Sierra Leone and Nigeria.

With the IMF warning of economic damage from the outbreak, Nigeria reported that a doctor indirectly linked to the Liberian-American who brought the disease to the country had died of Ebola in Port Harcourt, Africa's largest energy hub.

In Britain, drugmaker GlaxoSmithKline said an experimental Ebola vaccine is being fast-tracked into human studies and it plans to produce up to 10,000 doses for emergency deployment if the results are good.

So far 3,069 cases have been reported in the outbreak but the WHO said the actual number could already be two to four times higher. "This is not a West African issue or an African issue. This is a global health security issue," WHO's Assistant Director-General Dr Bruce Aylward told reporters in Geneva.

With a fatality rate of 52 percent, the death toll stood at 1,552 as of Aug. 26. That is nearly as high as the total from all recorded outbreaks since Ebola was discovered in what is now Democratic Republic of Congo in 1976.

The figures do not include 13 deaths from a separate Ebola outbreak announced at the weekend in Congo, which has been identified as a different strain of the virus.

Aylward said tackling the epidemic would need thousands of local staff and 750 international experts. "It is a big operation. We are talking (about) well over 12,000 people operating over multiple geographies and high-risk circumstances. It is an expensive operation," he said.

The operation marks a major raising of the response by the WHO, which had been accused by some aid agencies of reacting too slowly to the outbreak.

Medical charity Medecins sans Frontieres (MSF) welcomed the WHO plan but said the important thing was now to act upon it.

"Huge questions remain about who will implement the elements in the plan," said MSF operations director Brice de le Vingne. "None of the organisations in the most-affected countries ... currently have the right set-up to respond on the scale necessary to make a serious impact."

Early this month, the WHO classified the Ebola outbreak as an international health emergency. Concerns that the disease could spread beyond West Africa have led to the use of drugs still under development for the treatment of a handful of cases.

Two American health workers, who contracted Ebola while treating patients in Liberia, received an experimental therapy called ZMapp, a cocktail of antibodies made by tiny California biotech Mapp Biopharmaceutical. They recovered and were released from hospital last week.

The virus has already killed an unprecedented number of health workers and is still being spread in a many places, the WHO said. About 40 percent of the cases have occurred within the past 21 days, its statistics showed.

Previous Ebola outbreaks have mainly occurred in isolated areas of Central Africa. However the current epidemic has spread to three West African capitals and Lagos, Africa's biggest city. The WHO said special attention would need to be given to stopping transmission in capital cities and major ports.

"This epidemic is a challenge. Challenging to Liberia and challenging to all of those who are friends and partners of Liberia," President Ellen Johnson Sirleaf said on Wednesday, receiving a donation of ambulances from the Indian community.

"We can only return to our normal business ... if together we beat this demon that is amongst us."

Authorities in Nigeria announced the doctor's death in Port Harcourt, the main oil industry terminal of Africa's largest crude exporter. The doctor had treated a patient who evaded quarantine after coming into contact with Patrick Sawyer - a U.S. citizen who died in Lagos after flying in from Liberia last month.

Health Ministry spokesman Dan Nwomeh wrote in his Twitter feed that 70 people were now under surveillance in Port Harcourt, which is home to foreigners working for international oil companies.

A spokesman for leading operator Royal Dutch Shell said in London that the firm was "liaising with health authorities on the steps being taken to contain the disease".

Oil traders in Europe said insurance premiums for Nigerian cargoes had gone up slightly, but otherwise business was continuing as normal.

According to new figures released on Thursday, Nigeria has recorded 17 cases, including six deaths, from Ebola, since Sawyer collapsed upon arrival at Lagos airport in late July.

While Nigeria has yet to suffer any major economic disruption, the International Monetary Fund said the smaller, poorer nations at the heart of the epidemic were being badly hurt. "The Ebola outbreak is having an acute macroeconomic and social impact on three already fragile countries in West Africa," IMF spokesman Gerry Rice told reporters in Washington.

Rice said the IMF was assessing the impact and any extra financing needs with Guinea, Liberia and Sierra Leone.

The Lagos case contributed to the decision by a number of airlines to halt services to Ebola-affected countries. Air France said on Wednesday it had suspended flights to Sierra Leone on the advice of the French government.

Aylward said it was vital to restore commercial airline routes to the region to help transport aid workers and supplies, but in the meantime the WHO plan includes an "air bridge" to be operated by the U.N.'s World Food Programme.

"We assume current airline limitations will stop within the next couple of weeks. This is absolutely vital," he said. "Right now the aid effort risks being choked off."

West African health ministers meeting in Ghana on Thursday echoed the WHO's concerns and called for the reopening of borders and an end to flight bans.