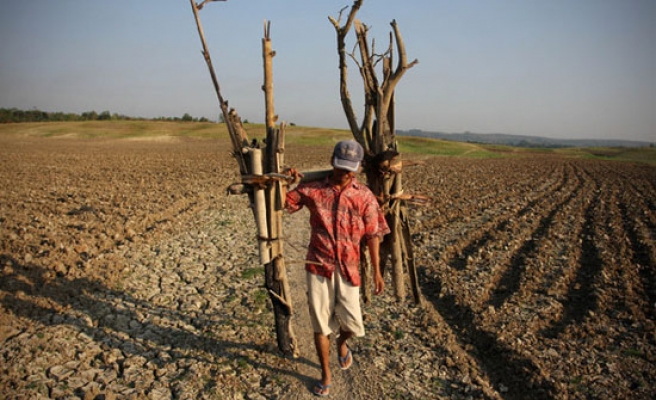 Indonesia’s national disaster management agency has declared that the majority of the country’s 34 provinces are experiencing drought caused by the El Nino weather phenomenon, warning of increased risk oxf fires.

Spokesperson Sutopo Purwo Nugroho told Anadolu Agency on Saturday that he predicts that the dry season will peak in September before giving way to the rainy season in November.

"The El Nino is causing the dry season to extend into November," Nugroho said. "I suggest farmers consult with agricultural agency officials before planting corps so they can decide the right time [to plant]."

The head of technicians at the Cilacap Meteorological Station in Central Java province warned that the El Nino effect had been weak in June but would strengthen through July and August.

"Due to El Nino, the beginning of the rainy season will be delayed," Teguh Wardoyo told Anadolu Agency. The rainy season in Indonesia usually falls from November to March.

The agency’s Nugroho indicated that parts of Papua province had already been hit by drought alongside extreme weather conditions.

"On 1-10 July, there was snowfall in Nduga Regency, Lanny Jaya Regency, and Puncak Regency that caused agricultural crop failure," he said. He added that the recent occurrence of unusual precipitation during the dry season that also led to the death of livestock and illness among residents.

The Jakarta Post reported that 11 people were killed during an extreme drop in temperature – to around minus 2 degrees Celsius – and hailstorms between July 3-5 in Lanny Jaya.

Nugroho warned that while most areas of Sumatra island were experiencing dry to moderate conditions, there is increased risk of forest fires.

Around 158 hotspots were detected this week indicating possible early forest fires in Sumatra, with 79 of them identified in Riau province.

"Based on the pattern of hotpots from 2006 to 2014 in Sumatra and Kalimantan [island], the number of hotspots will continue to rise until October," he said, adding that the areas of intense heat would peak in September.

In Java, hundreds of hectares of rice crops are under threat in Banyumas regency, the Tempo.co news website reported, while thousands of residents are also experiencing a clean water crisis and dried paddy fields in Cilacap and Purbalingga.

The drought has even hit Bogor, a West Javan city known for its high rainfall, prompting concerned citizens and government official to conduct Istisqa' prayers – local Muslim ritual of asking for rain – due to the lack of precipitation over two months.

The impact of the dry conditions on the region’s vegetation has even disrupted the lives of the wildlife, causing thousands of long-tailed monkeys – revered due to the local animist culture -- to attack residential areas in Banyumas in search of food.

"They’re not sacred animals anymore, but pests," Tempo.co quoted Kasmiyah -- a villager who like many Indonesians uses only one name – as saying.

Kasmiyah accused the primates of snatching food and herbs from homes, sometimes breaking through the roofs of houses in their pursuit.

The Ministry of Agriculture estimates that 200,000 hectares of land could be impacted by a heat wave, potentially causing crop failure in 10-20 percent of farmland, according to beritasatu.com.

Last month, Vice President Jusuf Kalla said the effects of El Nino were expected to be moderate, but added that Indonesia might have to import food items if the phenomenon continues until the planting season in October.

Indonesia suffered a serious drought in 1997 during the 1997-1998 El Nino – the strongest ever recorded – resulting in widespread forest fires whose smoke even spread to neighboring countries. According to state news agency Antara, the forest and land fires caused $2.45 billion in losses.