People who are extremely obese -- for someone of average height, carrying an extra 100 lb (45 kg) or more -- die 6.5 to 13.7 years earlier than peers with a healthy weight, study shows 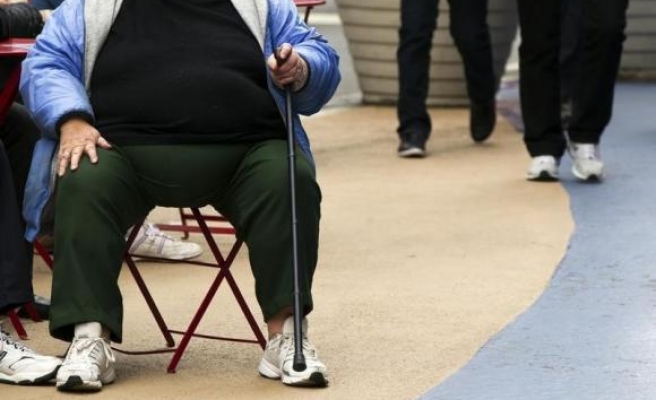 That obesity can cut life short by causing strokes and other illnesses comes as no surprise, but a study reported on Tuesday quantifies the toll: The most extreme cases cut a person's lifespan more than cigarettes.

The analysis, published in the journal PLOS Medicine, is the largest-ever study of the effect of extreme obesity on mortality. It found that people who are extremely obese -- for someone of average height, carrying an extra 100 lb (45 kg) or more -- die 6.5 to 13.7 years earlier than peers with a healthy weight.

The study, based on data from 20 large studies of people in the United States, Sweden and Australia, comes as rates of obesity have soared. Worldwide, nearly 30 percent of people, or 2.1 billion, are either obese or overweight.

The study included data on 9,564 adults with extreme obesity and 304,011 of normal weight.

The overall risk of dying at any given time rose continuously with increasing BMI within the extremely obese group, mostly due to heart disease, cancer, and diabetes.

The study, by scientists at the National Cancer Institute, did not calculate whether less extreme obesity shortens life, and the researchers could not say whether the results would hold for poorer, non-Western populations.

Because extreme obesity was so rare in the past, it was not possible to calculate its effect on mortality until now.

The new calculation is unlikely to cause people with extreme obesity to shed pounds, for "that presupposes that the main reason people don't lose weight is lack of willpower, and I'd argue that's not the case," said Dr Lee Kaplan, director of the weight center at Massachusetts General Hospital in Boston. "But it could have a beneficial effect if it galvanizes society to change in ways that stop promoting obesity and to develop aggressive treatments for extreme obesity."

In the United States, 36 percent of adults are obese, according to the National Center for Health Statistics. The incidence of BMIs of 40 or higher has more than quadrupled since the mid-1980s, and about one in six U.S. adults is extremely obese.