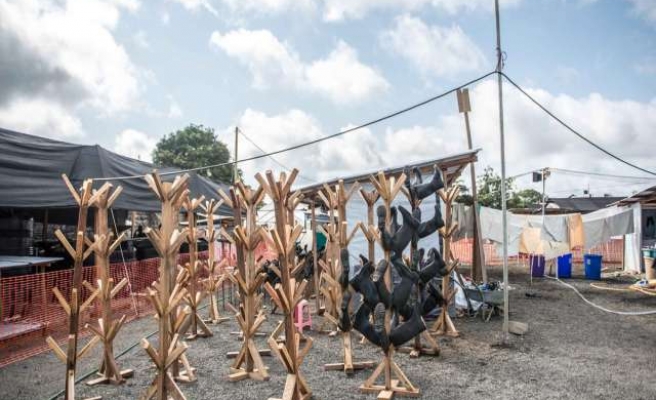 The people of Boys Town in Margibi County, home to the country's only Ebola crematorium, are threatening to block access to the facility if the government fails to relocate it.

"We have called on the government several times to have this crematorium removed from our community, but they seem not to hear us," Albert Reeves, a community leader, told Anadolu Agency.

"So we have no option but to stage a sit-in this Tuesday if they don't get back to us," he said.

In recent months, Ebola – a contagious disease for which there is no known treatment or cure – has killed 4,818 people worldwide, mostly in West Africa, according to figures from the World Health Organization (WHO).

Since June, the outbreak has killed 2,697 people in Liberia alone.

Following the appearance of the virus, the government turned a crematorium owned by the local Indian community into a site for burning the dead bodies of Ebola victims.

The crematorium is situated at the center of the community, surrounded by more than 500 homes along the Marshall highway outside Monrovia.

According to residents, who are estimated at over 25,000, the cremation of dead bodies in their community has caused serious problems, leading many to relocate.

The crematorium is only a stone's throw from Reeves's home.

The few trees still in the compound where the crematorium is located have been singed by the fire and smoke of burning bodies.

Reeves says the burning of bodies and explosive sounds that come from the crematorium are unbearable.

"Not a single night passes [without them] burning bodies," he said.

"The scary thing about it is the heavy explosives; we don't know whether it's the heads of the dead bodies that explode like that," added Reeves. "When it explodes, it's like a mini-earthquake; the entire ground shakes."

Another resident, 30-year-old Carolyn Doelu, is no less disturbed by the presence of the crematorium in her community.

"For me, it's too traumatizing," she told AA. "I have never seen this kind of thing before."

"We are not used to burning bodies and hearing the sound of our fellow Liberians' bodies exploding – it's painful," said Doelu.

"The odor of burned bodies enters my house," she added. "At night, when they start burning them, I find it very difficult to sleep."

The notion of cremating the dead is alien to the local culture.

The government's decision to resort to cremation came following the refusal of local residents to allow the burial of virus victims in or near their communities.

Health experts believe cremation is one of the surest ways to contain the spread of Ebola.

Boys Town, however, is the only place in which cremation is being carried out: in the country's other 15 counties, victims' bodies are still being disposed of by burial teams.

"When the bodies are set on fire, the smoke can be everywhere, like someone is burning a bush," said Reeves. "It smells very bad; medical people said if this continues, some of us may suffer lung cancer a few years from now."

Locals also complain about the unprecedented increase in flies and insects drawn by the burning bodies.

"We are eating with flies," said Reeves, of which, he noted, the town had never seen so many.

Members of the community also complain about the carless disposal of unwanted materials by body-disposal teams, which, they fear, could potentially lead to a local outbreak.

"The most frustrating part of this crematorium here is the carelessness of the Ebola team," Reeves lamented.

"The gloves, plastic bags – even the nose protectors they use – are being dropped all over the place," he said. "Children could see these things like toys and take them to play with, which is very risky for us – they could get Ebola."

Since the outbreak of the virus in Liberia, the community in Boys Town has not reported any infections – a record the community hopes to maintain.

"Most community members have run away because of the crematorium, but some of us – who have nowhere else to go – are still here with our children," said Reeves.

"We are just living here by the grace and mercy of God," he added.

Liberia's Environmental Protection Agency, for its part, has recognized the community's concerns, saying it is in ongoing discussions with the government to have the crematorium moved elsewhere.

"We visited the community after they [community members] wrote to us and complained of the smoke and the sounds produced by cremation," agency head Ayaa Vohiri told AA.

She did not elaborate on the potential environmental impact – or other effects –the crematorium could have on the local population.

Vohiri said discussions were underway with all relevant government agencies to relocate the offending facility.

She insisted that, at the outset of the crisis, her agency had recommended cremation, but had never been consulted as to where the crematorium should be located.

Vohiri added that her agency was working with other partners with a view to finding a suitable alternative location.

But it remains unclear when such a decision will be taken – and the community appears to be running out of patience.

For his part, Reeves, the community leader, accused the government of turning a deaf ear to their plight.

He insisted the community would go ahead with its planned sit-in on Tuesday and its plans to block the crematorium's entrance.

"Every one of us, including our children, will sit on the road. No cars carrying dead bodies will come into our community," Reeves vowed, adding: "We're tired."