Changes to sea-ice cover in the Antarctic that effects the breeding and feeding of penguins was their main threat. 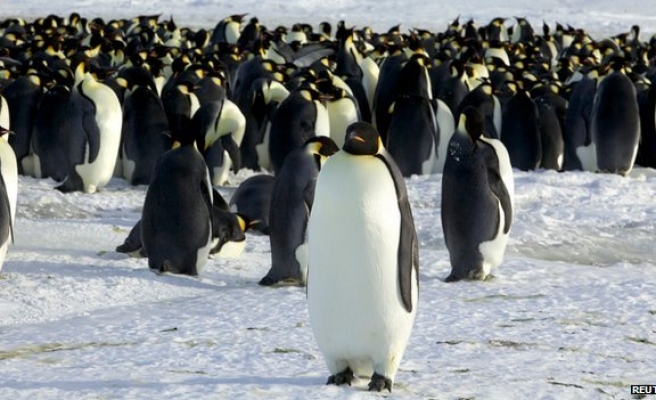 Climate change is likely to cut Antarctica's 600,000-strong emperor penguin population by at least a fifth by 2100, a study suggests.

Changes to sea-ice cover in the Antarctic that effects the breeding and feeding of penguins was their main threat.

Different penguin colonies have different dynamics, but all are expected to be in decline by the end of the century.

Governments were urged by US, British and Dutch researchers to list the birds as endangered. Such a listing could impose restrictions on tourism and fishing.

Woods Hole Oceanographic Institutions team, lead by Stephanie Jenouvrier said the global population of emperor penguins would probably decline by between 19 and 33% from current levels.

Dr Jenouvrier said the penguins "face possible extinction throughout a significant portion of their range in the foreseeable future".

She added that emperor colonies in Antarctica's Ross Sea may experience population declines later than others because sea ice conditions are still suitable for them.

"Implementing a marine protected area in the Ross Sea could help buy time to avoid extinction and to put in place needed conservation and greenhouse gas mitigation strategies," she said.

Emperor penguins leave the colony for months at a time and travel long distances across Antarctic ice to reach open water to find nourishment such as krill to feed their young.

Changes to the sea-ice cover can also significantly affect the abundance of the emperors primary food source, krill.

"There is a goldilocks point for ice and emperor penguins," Phil Trathan, an expert at the British Antarctic Survey (Bas), told Reuters.

Mr Trathan said it was unclear if the ungainly birds could adapt by climbing on to land or higher ice.

Satellite measurements of Antarctic sea-ice extent show winter coverage to be at record levels.
However, as conditions in the Antarctic warm, climate computer modelling expects this trend to be reversed in the future.