Since an exceptionally warm 1998, there has been "a short-term slowdown in the warming of Earth's surface," Britain's Royal Society and the U.S. National Academy of Sciences said in a report. 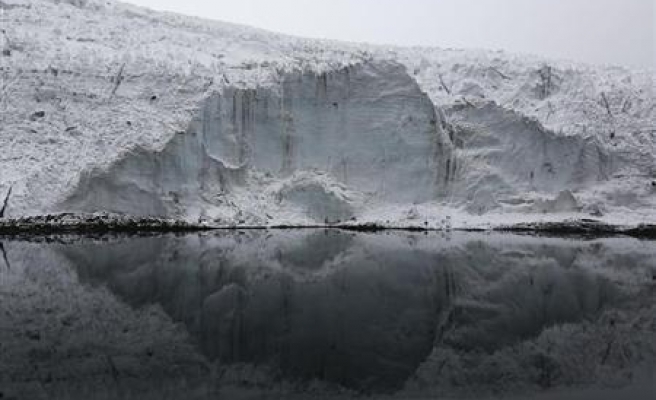 A slowdown in the pace of global warming so far this century is likely to be only a pause in a longer-term trend of rising temperatures, the science academies of the United States and Britain said on Thursday.

Since an exceptionally warm 1998, there has been "a short-term slowdown in the warming of Earth's surface," Britain's Royal Society and the U.S. National Academy of Sciences said in a report.

But, they said, that "does not invalidate our understanding of long-term changes in global temperature arising from human-induced changes in greenhouse gases."

The warming slowdown has emboldened those who question the evidence about climate change and ask whether a shift in investments towards renewable energies such as wind and solar power, advocated by many experts, is really needed.

But the report said that scientists were "very confident" that the planet would warm further this century, causing more extreme heatwaves, droughts and rising seas.

A build-up of greenhouse gases from human activities, mainly the burning of fossil fuels, is warming the atmosphere and the oceans, raising sea levels and melting Arctic ice, the report said, supporting the long-held view of a U.N. panel of climate scientists.

It projected that temperatures would rise by between 2.6 and 4.8 Celsius (4.7-8.6 F) by 2100 unless governments took strong action to limit rising emissions of greenhouse gases, broadly in line with U.N. estimates.

Almost 200 nations have agreed to work out a deal by the end of 2015 to combat climate change. So far there has been little progress in negotiations, partly because weak economic growth has sapped government interest.

Policy decisions were only possible if "based on the best possible advice about the science of climate change," Paul Nurse, President of the Royal Society, told a briefing.

The warming hiatus may be caused by shifts in the oceans that are absorbing more heat from the atmosphere, the report said. Other studies suggest that sun-dimming volcanic eruptions or a lower output from the sun may contribute.

Brian Hoskins, of Imperial College London, said warming trends in past decades had varied a lot despite rising greenhouse gas emissions. "It's a staircase rather than a gentle trend upwards," he said.

Among signs of rising temperatures, the report said that record heatwaves had hit Australia in 2013, the United States in 2012, Russia in 2010 and Europe in 2003. There had been fewer cold snaps, like in the United States this winter.

"It is now more certain than ever, based on many lines of evidence, that humans are changing Earth's climate," it said.

Last year, the U.N.'s panel on climate science raised the probability that human activities, rather than natural variations, were the main cause of warming since the 1950s, to at least 95 percent from 90 in a previous assessment in 2007.

Less Forest less Oxygen this is why the Moon. That has no Oxygen is very cold on the side with out Sun Light,And hot as ever on the side with Sun Light. Way too cold and too hot to live there. You would need at least 10times the Energy we use on Earth to even live there and life on the Moon would be very shortWith no blank of Oxygen to lessen or reduce the Sun’s UV Rays and Solar Wind they are deadly there on our Moon.