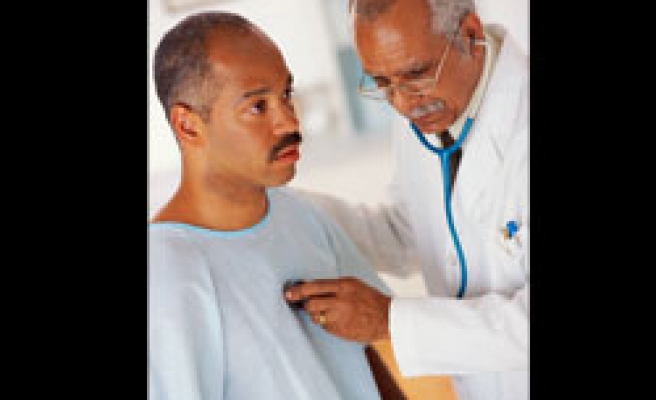 The researchers expressed concern that using drugs such as Pfizer's Viagra or Eli Lilly's Cialis to treat erectile dysfunction could mask the symptoms that point to widespread heart and artery disease and said men complaining of impotence should be checked by a cardiologist.

"Erectile dysfunction is something that regularly should be addressed in the medical history of patients; it might be a symptom of early atherosclerosis," Dr. Michael Bohm of the University of Saarland in Germany, who led the study, said in a statement.

His team studied 1,519 men in 13 countries taking part in some larger studies of various heart disease treatments. As part of the study the men were also asked if they had erectile dysfunction.

More than half of them, 55 percent, did, Bohm's team said in a report published in the journal Circulation and also presented at a meeting of the American College of Cardiology.

During the two years of the study, 11.3 percent of the patients who reported erectile dysfunction died, compared to 5.6 percent of those with mild or no impotence problems.

"It has long been known that erectile dysfunction is a marker for cardiovascular disease," said Dr. Sahil Parikh at University Hospitals Case Medical Center in Cleveland, Ohio, who was not involved in the study.

The first impotence drug, Pfizer's Viagra, known generically as sildenafil, was at first developed to lower blood pressure, he said.

"They realized it had this other effect, which patients quite enjoyed," Parikh said in a telephone interview.

Viagra and rival drugs such as Eli Lilly's Cialis and Bayer AG's Levitra all work by increasing blood flow.

But while the erectile dysfunction drugs help blood flow all over the body, they do not treat the underlying hardening and narrowing in the arteries that is causing the problem.

"If patients have erectile dysfunction, we have to be very aggressive about screening and treating them for heart disease," Parikh said.

When Viagra came onto the market, many health experts welcomed it as a way to get men who might otherwise neglect their health to go to a doctor. But Bohm and Parikh both agreed that patients -- and their doctors -- need to look hard at the hearts of men with erectile dysfunction.

"Men with ED going to a general practitioner or a urologist need to be referred for a cardiology workup to determine existing cardiovascular disease and proper treatment," Bohm said.

"The medication works and the patient doesn't show up any more," he added. "These men are being treated for the ED, but not the underlying cardiovascular disease."

The drugs are wildly popular. Viagra alone had sales of nearly $2 billion in 2009.