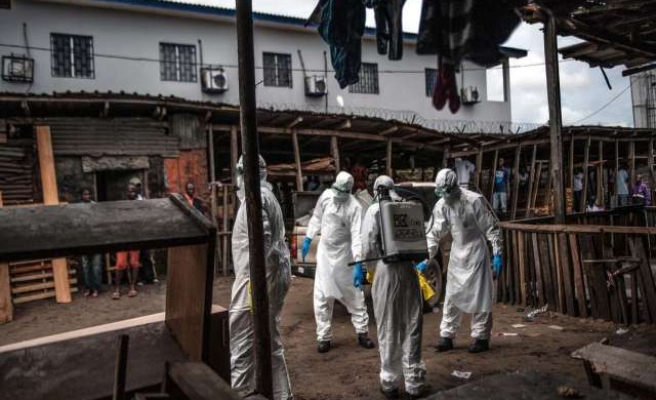 The Liberian government's plan to conduct house-to-house searches for Ebola infections has won support from many Liberians who believe the government should stop at nothing to contain the deadly virus, which has killed thousands of their compatriots.

"The fact is that citizens are now aware that the Ebola rate is improving; but for the government to be totally sure, they have to do house-to-house searching," John Stephenson, a 33-year-old resident of capital Monrovia, told Anadolu Agency.

The government's Ebola Incident Management System has recently announced plans to enforce a new strategy for dealing with Ebola containment, which will include house-to-house searches for sick people.

In recent months, Ebola – a contagious disease for which there is no known treatment or cure – has killed roughly 5,177 people, mostly in West Africa, according to the World Health Organization.

At least 2812 of the Ebola deaths have been registered in Liberia alone.

But the country has seen a reduction in the number of new Ebola cases since the beginning of October.

The country's health authority and the Doctors without Border (MSF) have, meanwhile, warned against complacency among the public.

Fearing a possible reversal of recent gains, the government wants to ensure that sick people are not simply hiding within their communities.

"I think the government is doing extremely well. If we look back to August and September, the situation was worse," said Stephenson.

"At that time, when one walked along the streets, more than three ambulances would pass every ten minutes," he recalled. "Now it takes more than two hour to hear an ambulance pass."

Stephenson believes that, to maintain this momentum, the government should begin looking for possible carriers of the virus hiding within the community.

"Liberians were stubborn before. But seeing that Ebola is real and its horrific impact, which has made many afraid of dying, to simply stay home would mean nothing at the moment," he said.

William David, 22, also believes the planned searches will be good for the country and its citizens, as he wishes to return to school and normal life.

"If the sick people are taken from the various communities, Ebola will go and they will not infect their families," he told AA.

"I used to feel bad about what was happening in my country when 300 and more people where dying every few months," lamented David.

"When the government starts doing searches, I will allow them in our house because I want this Ebola thing to end," he said. "I want to go back to school and do normal things."

Stephenson, for his part, believes Liberia now has more Ebola treatment units that will be able to accommodate any sick people found hiding – unlike in June and August, when there was an insufficient number of beds nationwide.

At the time, patients showing symptoms of Ebola were turned away by hospitals and treatments centers, with little option but to return to their homes – leading to further deaths and infections.

Three Ebola treatment centers have already been set up by the U.S. Marines in cooperation with the Liberia army, with 17 more expected to be built throughout the country.

Stephenson, for his part, opposes the idea of locking down the city during house-to-house searches, as had been the case in neighboring Ebola-hit Sierra Leone.

"A lot of people don't have jobs. Each morning, they have to go looking for something little to do to get money to support their families," he said, noting that the government was now in a state of economic paralysis.

"What will happen to such people if there are restrictions on movement for several days?" Stephenson asked. "They are hopeless; some could die of hunger."

He recommends that the capital be divided into separate zones, with different zones being searched on different days.

"Community taskforces are already acquainted with the community and its inhabitants, so by using the taskforce the community will better relate to them during the search," Rev. John Sumo, director of public health promotion at the Health Ministry, told AA.

He believes that a major reason why the country is still reporting new Ebola cases is that some people are hiding sick relatives at home, fearing their cremation after death.

"People are uncomfortable with the cremation of relatives who have died of Ebola, making people afraid to show up for early treatment," said Sumo.

"We are holding discussions to look into cremation," he added.

Jonathan Wesseh, a Liberian clergyman, has voiced concern about the new strategy.

"We have been praying as a church for Ebola to go," he told AA.

"I support the secular and physical approach by the authorities to eradicate Ebola. But what happens to people who won't be tested for Ebola when all the hospitals are not fully functional?" Wesseh asked.

"Taking sick people from the community is good, but I do not want a situation where, if they do not have Ebola they are not treated for the illness they may be suffering from and are sent back to the community to die," he said.

Pastor Wesseh wants the government, therefore, to streamline the healthcare delivery system at major hospitals, which, he said, would encourage citizens to seek treatment for illnesses other than Ebola.

"Those hospitals the government claims are open are just standing there, but no services are being offered," fumed Wesseh.

"Doctors and nurses are afraid to touch people because they don't want to get Ebola, since they cannot detect who has it and who doesn't," he said.

The clergyman wants the government to revamp the health sector and to have Ebola testing equipment placed in each major hospital, so that every patient visiting the hospital could first be tested for Ebola with a view to ensuring the safety of healthcare workers and other patients.

The government, for its part, has assured the public that, when sick people are taken from the community and test negative for Ebola, they would be transferred to nearby healthcare centers to be treated for whatever other illnesses they might be suffering from.