Melting ice forces some walruses to beach in Alaska

Researchers monitoring these patterns estimate as many as 35,000 walruses came to shore near the coastal village of Point Lay, about 700 miles (1130 km) north of Anchorage at the weekend. 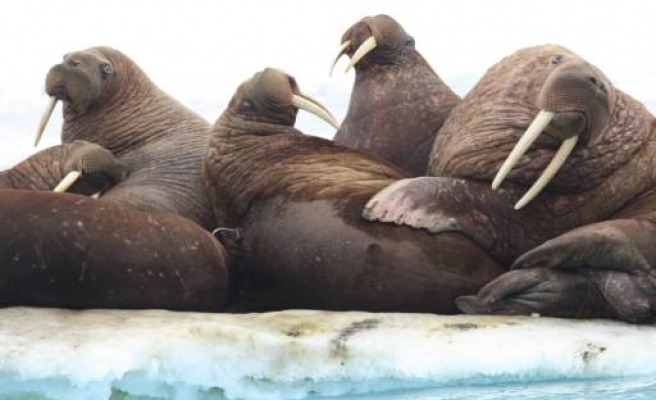 Fast-melting Arctic sea ice has forced some 35,000 Pacific walruses to retreat to the Alaska shoreline, scientists from several federal agencies said on Wednesday.

Walruses are accomplished divers and frequently plunge hundreds of feet to the bottom of the continental shelf to feed. But they use sea ice as platforms to give birth, nurse their young and elude predators, and when it is scarce or non-existent they haul themselves up on land.

"One of the differences between this haul out and other ones is the sheer size and number of animals coming to shore," said U.S. Geological Survey ecologist Chadwick Jay.

Such haul outs in areas of the Chukchi Sea, which polar bears also use as platforms for hunting, were first observed along Russia's coasts until Pacific walrus masses began appearing on Alaska's coastline in 2007, U.S. scientists said.

Researchers monitoring these patterns estimate as many as 35,000 walruses came to shore near the coastal village of Point Lay, about 700 miles (1130 km) north of Anchorage at the weekend. The tusked beasts can be more than 10 feet (3 meters) long and weigh 2,700 pounds (1,225 kilograms).

The mass movement can be treacherous for younger walruses who can be trampled by a stampede triggered by aircraft or predators, such as grizzly bears and polar bears, Garlich-Miller said.

Fish and Wildlife estimates the Pacific walrus population as between 200,000 and 250,000 animals, though the exact number is unknown.