Nepal's successful fight to save its wildlife

In the past few years, Nepal has seen the numbers of endangered species, such as the Royal Bengal tiger or the one-horned rhino, rise. 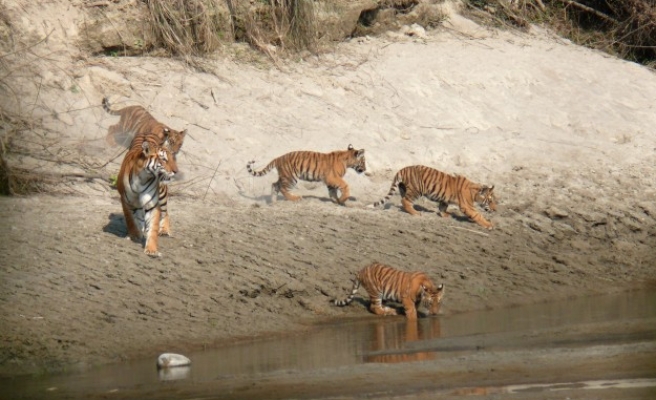 Inexorably, it was bound to disappear. The Royal Bengal tiger was supposed to be but a distant memory.

But, thanks to concerted efforts by the government and local communities, the feline roams the Nepalese plains still.

But the wild animals' home also served as a hunting ground for the royal family and their international guests. In one hunting expedition in 1911, King George V of Britain slaughtered 36 tigers, 18 rhinos and several leopards and bears. Nepal's own rulers were no better: Juddha Shamsher Jang Bahadur Rana, the country's prime minister, massacred 433 tigers in less than a decade in the 1930s.

The number of tigers began to significantly diminish by the early 1970s as people migrated to the plains in search of cultivable farmlands contributing to human-animal conflict, as well as rampant poaching, and alarming conservationists worldwide.

A group of pioneering Nepali conservationists, educated in Western universities and sensitized about the needs to protect wildlife, persuaded the country’s royals to turn their hobby into concerted efforts at preserving the flagship animal and other creatures.

As a result, the monarchy introduced a series of measures: in 1973, the tiger was declared an endangered species. Nepal then passed the National Parks Act, and established the Chitwan National Park, which became a United Nations World Heritage Site a decade later.

Progress was hindered because of Nepal's decade-long civil war which ended in 2006 and deprived wildlife of much-needed protection, as army troops were deployed to fight the insurgent Maoists.

But, coupled with raised awareness for the struggle against poaching, government initiatives have seemingly borne fruit.

In an international symposium early February in Kathmandu, called Towards Zero Poaching in Asia, Nepal was lauded for raising the number of Royal Bengal tigers from 121 in 2009 to 198 in 2013. The Himalayan nation has pledged to raise that number to 250 by 2020.

Ghanashyam Gurung, conservation program director at World Wildlife Fund (WWF) Nepal, attributed the success to government initiatives such as increased presence of the country’s armed forces in protected areas as well as police crackdown on poaching.

"This achievement has been possible because of political commitments, government leadership, law enforcement agencies which gave high priority to controlling poaching and illegal trade of wildlife and body parts," Gurung told The Anadolu Agency.

In early February, Raj Kumar Praja, arguably Nepal’s most wanted poacher, who is suspected of killing 15 rhinos in Chitwan National Park, was arrested in Malaysia and deported to Nepal.

Praja, who faces a 15-year jail sentence, was the head of a group of a dozen smugglers, who were arrested in September 2009. Carrying a fake passport, Praja had fled to Malaysia and Nepal had solicited Interpol in order to apprehend him.

But, even as a high-profile poacher was caught, even as Kathmandu organized the zero poaching symposium, receiving praise from 13 other Asian tiger countries for curtailing poaching, tiger skins and bones, smuggled from India, were being intercepted in western Nepal.

A harsh reminder that the country cannot expect to protect its wildlife without its neighbors.

Nestled between Asian giants India and China, Nepal has been known for being a hub for wildlife trade as demand in the Southeast Asian countries has fueled poaching and undermined conservation campaigns.

Global illegal trade in wildlife is estimated by the United Nations Environment Program to range between $50 billion and $150 billion a year.

"There is massive demand for illegal animal parts in China and Southeast Asia. Almost every part of the tiger has medicinal value in traditional Chinese medicine while tiger bones, whiskers, and teeth are prized as decorative ornaments in South and Southeast Asia," an editorial at the Kathmandu Post noted on Feb. 8.

"Focusing only on conservation won't solve the problem. The degree of efforts applied to fight against illegal poaching and wildlife body parts is inadequate and there is problem in sharing information about poachers or its trade among countries," Ramesh Prasad Bhusal, a leading environmental journalist based in Kathmandu, told AA.