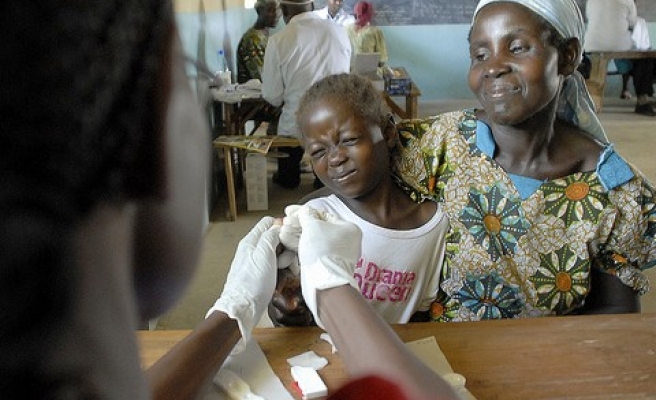 The South Sudanese Health Ministry on Wednesday launched, in partnership with UNICEF and the World Health Organization (WHO), a nationwide immunization campaign against measles and polio that will target more than 2.4 million children.

"Today we are beginning the first phase of this integrated vaccination campaign, which will be conducted for one week, until April 30," Health Minister Riek Gai Kok said at the campaign's official launch at Juba's AI-Sabah Children's Hospital.

"Sadly, we are facing a situation where many children in South Sudan today are malnourished, so it is especially important that they are protected with this safe and effective vaccine," said the minister.

Kok noted that, during the week, a team of vaccinators would be traversing seven of South Sudan's ten states.

"From today, 4000 vaccination teams will be reaching out to children across Western, Central and Eastern Equatoria, Northern and Western Bahr el-Ghazal, Warrap and Lakes States," he said.

"Teams will be organized into fixed, temporary, mobile and outreach vaccination posts, reaching into all communities," he added.

The health minister said the second phase of the vaccination drive would be conducted in the Upper Nile, Unity and Jonglei states, all of which are relatively difficult to access at the moment.

"The Ministry of Health is currently exploring the most effective ways to reach children in these states," he said. "All children who have been displaced by the current conflict to camps in the first seven states will be covered in the first round."

South Sudan has been shaken by violence since last December, when President Salva Kiir accused his sacked vice president, Riek Machar, of trying to overthrow his regime.

The conflict has already claimed more than 10,000 lives, with the U.N. estimating that some one million South Sudanese have already been displaced by the violence.

According to UNICEF, the conflict has served to make children more susceptible to vaccine-preventable diseases.

"We urge parents and caregivers not to overlook the importance of protecting children from the silent killers, such as measles," Jonathan Veitch, UNICEF representative in South Sudan, said at Wednesday's launch ceremony.

"We have already seen the enormous preventive powers of measles vaccines in the camps where vaccinations were carried out," Veitch added. "The number of children reported to have died was zero."