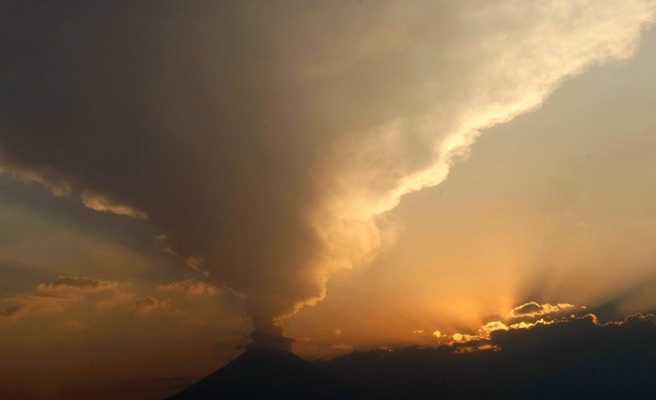 Small volcanic eruptions help explain a hiatus in global warming this century by dimming sunlight and offsetting a rise in emissions of heat-trapping gases to record highs, a study showed on Sunday.

Eruptions of at least 17 volcanoes since 2000, including Nabro in Eritrea, Kasatochi in Alaska and Merapi in Indonesia, ejected sulphur whose sun-blocking effect had been largely ignored until now by climate scientists, it said.

The pace of rising world surface temperatures has slowed since an exceptionally warm 1998, heartening those who doubt that an urgent, trillion-dollar shift to renewable energies from fossil fuels is needed to counter global warming.

Explaining the hiatus could bolster support for a U.N. climate deal, due to be agreed by almost 200 governments at a summit in Paris in late 2015 to avert ever more floods, droughts, heatwaves and rising sea levels.

"This is a complex detective story," said Benjamin Santer of the Lawrence Livermore National Laboratory in California, lead author of the study in the journal Nature Geoscience that gives the most detailed account yet of the cooling impact of volcanoes.

"Volcanoes are part of the answer but there's no factor that is solely responsible for the hiatus," he told Reuters of the study by a team of U.S. and Canadian experts.

Volcanoes are a wild card for climate change - they cannot be predicted and big eruptions, most recently of Mount Pinatubo in the Philippines in 1991, can dim global sunshine for years.

Santer said other factors such as a decline in the sun's output, linked to a natural cycle of sunspots, or rising Chinese emissions of sun-blocking pollution could also help explain the recent slowdown in warming.

The study suggested that volcanoes accounted for up to 15 percent of the difference between predicted and observed warming this century. All things being equal, temperatures should rise because greenhouse gas emissions have hit repeated highs.

"Volcanoes give us only a temporary respite from the relentless warming pressure of continued increases in carbon dioxide," said Piers Forster, Professor of Climate Change at the University of Leeds.

A study by the U.N. Intergovernmental Panel on Climate Change last year suggested that natural variations in the climate, such as an extra uptake of heat by the oceans, could help explain the warming slowdown at the planet's surface.

The IPCC projected a resumption of warming in coming years and said that "substantial and sustained" cuts in greenhouse gas emissions were needed to counter climate change.

It also raised the probability that human activities were the main cause of warming since 1950 to at least 95 percent from 90 in 2007. Despite the hiatus, temperatures have continued to rise - 13 of the 14 warmest years on record have been this century, according to the World Meteorological Organisation.

If Volcanic eruptions ADD CO2 to atmosphere (see USGS) AND CO2 is said to contribute to Global Warming then how can eruptions slow/halt AGW? Can't have it both ways.