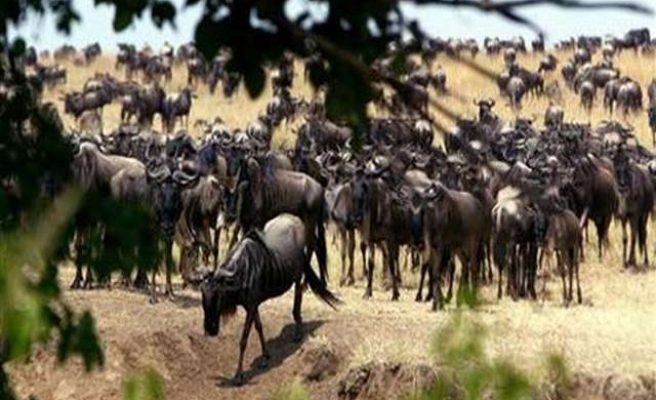 Tourists are arriving in droves to the world-renowned Masai Mara Game Reserve in the southwestern part of Kenya's Great Rift Valley region to see the annual migration of animals from Tanzania to Kenya, widely known as the "Great Migration."

He said Masai Mara, which was first turned into a game reserve in 1948 during the days of British colonial rule, has more than 100 hotels and lodges.

"We rate them as five, four and three star hotels," Sintiyio explained. "Dotting the hotels are fully-furnished tents and camps."

He said nearly three quarters of the hotels are owned by Kenyans, while the rest are owned by citizens of South African and Britain.

They feature facilities such as special viewing sections, hot air balloons and airstrips.

Official statistics show that Masai Mara's more than 8000-bed capacity is booked solid for four months in advance of the three-month-long annual phenomenon.

The migration, which starts at the beginning of July and ends in September, involves more than two million wildebeests, along with nearly a million other animals that tag along.

Each year, as the Serengeti and Ngorongoro crater plains in neighboring Tanzania turn into dustbowls, the wildebeest population instinctively begins its long march northwards.

They cross the Grumeti and Mara rivers to the ungrazed plains of the Masai Mara in Kenya's Narok County, advancing like synchronized lawn mowers and looking like an army of massive ants on the march.

Year-in, year-out, Kenya's wildebeest migration – one of the greatest wildlife spectacles on earth – has attracted tourists from all over the world.

"The tourists are arriving every day. This is their season for seeing our animals," he said.

Masai Mara, located about 40km from the Mara River, is the only game reserve in Kenya that has an estimated 97 species of mammals, amphibians and reptiles as well as more than 400 birds species.

It is held in trust by the Kenyan government for the Masai people, a nomadic cattle-herding community.

Apart from wildebeests, Sintiyio said, tourists can also enjoy watching what he called the "big five" group of game animals.

"We have lions, elephants, buffaloes, leopards and black rhino," the warden explained. "For many years, these animals have attracted thousands of tourists."

Alexander Otieno, a worker at the Intrepids Club, a tented safari camp on the outskirts of the Masai Mara, has been watching the wildebeest migration for years.

"Looking around the park, creatures of every kind seem to be cheering the onset of the migration," he told AA, describing the mood.

According to Sintiyio, the migration season is when predators – including leopards, lions, wild dogs and hyenas – can feast on an abundance of prey.

"They will be waiting somewhere in the river to pounce on weak animals that might find it difficult to cross the river," he said.

"Thousands of crocodiles usually wait at various crossing points for weak ungulates and feeble animals that may not withstand heavy river currents," said the warden.

Nick Ole Murero, Masai Mara-Serengeti eco-system coordinator, said tourists and predators were not the only ones eagerly awaiting the wildebeests' appearance.

He said poachers, too, position themselves in the bushes separating Tanzania's Serengeti and Ngorongoro National Parks, from which the wildebeests cross into Kenya.

"They place snares in strategic points to trap the wildebeests," Murero told AA. "And indeed they kill animals during the migration."

Narok County Executive in charge of tourism Allan Twala said satellite-based surveillance systems had been installed at the game reserve to ensure that tourists' movements are closely monitored.

"We were compelled to tighten security due to recent terrorist attacks," he told AA.

"Security personnel, too, are working around the clock to ensure that there is maximum safety everywhere during the wildebeest migration and after it ends," Twala said.

The wildebeest population moves in an 800km anti-clockwise circle before returning to Tanzania some three months later to pastures replenished by the onset of the rainy season.

Along the way, the dung left by the animals lays the foundation for next season's pasture.