The baby underwent a successful operation, after spending two weeks in the new born intensive care unit, she is now making a good recovery. 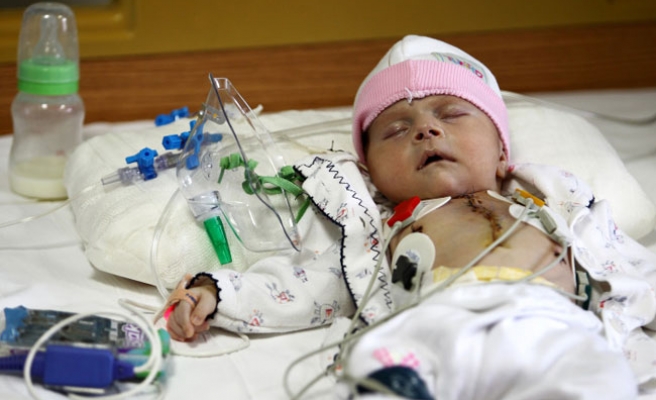 A baby-girl has defied the odds by surviving a major operation after being born with her heart outside her chest.

Sultan Tukenmez was born in the southeastern province of Gaziantep on July 27 with a very rare condition called "ectopia cordis" where the chest fails to close properly over part of the heart.

She was transferred to the Dokuz Eylul University Hospital Department of Cardiovascular Surgery in the western province of Izmir by an ambulance plane.

The baby underwent a successful operation. After spending two weeks in the new born intensive care unit, she is now making a good recovery.

Her father, Mehmet Tukenmez, said in an interview with the A.A, "my wife gave birth to our girl on July 27. While I was waiting for my newborn girl with a great excitement, doctors told me that she was born with her heart outside her chest. Doctors rated her chance of survival at one million to one. I made phone calls with a number of hospitals. None of them admitted us."

"In the end, doctors at the Dokuz Eylul University accepted to operate on her. Her transfer from Gaziantep to Izmir was another major problem. I sent an e-mail to the Justice & Development (AK) Party. They sent an ambulance plane to Gaziantep the next day. They took her to Izmir and doctors achieved the impossible. Now, we are holding her in our arms. It is a miracle," he said.

"The baby was transferred to our hospital by an ambulance plane of the Ministry of Health. There was only a membrane on the surface of the heart instead of skin. We operated on her successfully. Her transfer by an ambulance plane was of great importance. It is a sign of the current level of health services in our country," he said.