Figures from the Turkish Statistics Institute (TurkStat) show that there were 123,325 divorces in Turkey in 2012, an increase of 2.7 percent from the previous year. 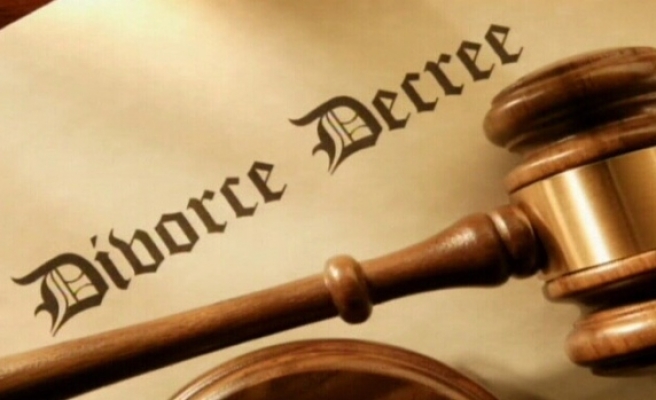 Figures from the Turkish Statistics Institute (TurkStat) show that there were 123,325 divorces in Turkey in 2012, an increase of 2.7 percent from the previous year. The statistics indicate that divorces among couples have soared during the last 10 years, with a 30 percent divorce rate increase.

“The main reasons for divorce are, respectively, lack of communication, infidelity and economic concerns within the family,'' marriage expert İnci Yeşilyurt told Today's Zaman. Yeşilyurt underlined that couples fail in their marriages because of their inadequate knowledge about what it means to be married before saying yes to one another. She also claims that marriages based either solely on love or families getting on well are doomed to fail.

According to Yeşilyurt, self-centered couples are defeated by their egos. She says the most significant example of ego clashes in marriages are ones related to money issues.

Marriages statistics indicate that, compared with men, the rate of women under 30 asking for a divorce is quite high. The roles reverse after 30, as men show a dramatic increase in demanding divorce after that age.

“There are two basic reasons for these numbers in who asks for divorce when. For women in our society, it is easier to settle down before the age of 30 or 35, but not so much after. Men, though, still have time to have a family, even after that age,” says Yeşilyurt. There is a mentality that if a women gets divorced earlier, she has a better chance of entering a happier marriage before she is too old in the eyes of society. A man, on the other hand, can divorce later in life and have less trouble remarrying. She added that there are other reasons for men to ask for a divorce at a later age, like waiting for their kids to grow up. But in those cases she says that “they emotionally divorce long before.”

Psychologist Beyhan Budak expressed another viewpoint regarding gender-based divorce ages, saying that it takes time for men to reach a certain financial benchmark. “When men move into their 30s and have a certain financial situation, there come more alternatives and opportunities,'' he says. He indicated that women relatively act more “sensible" in their 20s and put aside their emotions when making decisions.

There are also striking differences in the pattern of divorce cases as well. In contrast to Yeşilyurt, Budak stated that the top reasons for getting divorced include the families of the couples, sex life, marriage at a young age, financial problems and Internet addiction.

“Sometimes parents get too involved in their children's marriages. Partners may be dissatisfied with their sexual life. Those who marry at a young age may make bad decisions as they could be inexperienced with relationships. Money issues may immerge. Even addiction to the Internet can destroy a marriage,'' he said.

TurkStat's statistics show that 80 percent of divorced couples married again, while 17 percent re-married their ex. Yeşilyurt pointed out that most marriages of couples who get back together fail. “I do not approve of marrying an ex-husband or wife as these couples mostly show a tendency to ignore their problems and want to give their relationship one more chance,'' she said. “Those couples are impulsive. That is, if they get angry, they may demand divorce again easily.''

In 2012, statistics show that the divorce rate dramatically rose in marriages that lasted 20 years or more. But the rate reached a peak with those who split up within the first year of marriage, with 11,075 divorces. Budak explained that the biggest reasons for divorce involve crises between couples seen during the first three years of marriage as couples are getting used to living together.

As for those who get divorced at a later age, he says: “When couples stay married for 20 years and then get divorced, children are usually the primary reason the marriage lasted so long. Once children grow up and get jobs, the breakups begin.” Budak added that empty nest syndrome is another factor contributing to divorce. When children leave home for university or marriage, couples often recognize that they have already split up with their partner emotionally and are merely just parents instead of part of a couple.

The divorce rate in Turkey in 2012, according to EU statistics agency Eurostat, was 1.6 divorces per 1,000 residents. This is low compared to EU countries. Latvia had the highest rate of divorce with 3.6 per 1,000 and Lithuania followed with 3.5.

As couples increasingly head to court to end their marriages, the need for marriage education is becoming more and more evident, experts believe.

During a marriage education course, couples are chiefly taught family planning, how to communicate and respect one another.

“Divorce rates keep rising in Turkey. However, there are also couples who stay in failed marriages due to familial and societal pressure, causing husbands or wives to stray. Marriage education is necessary to prevent divorce and facilitate healthy relationships for couples,'' Keçe notes, criticizing the Family and Social Policy Ministry for not making this education a legal requirement before marriage.

“The ministry says marriage is a ‘human right'; thus, education before marriage cannot become obligatory,” Keçe says. But he argues that if family is considered a sacred institution, then educating couples would do nothing but support that.