Assistant Professor Utkan Demirci of Medicine and Health Sciences and Technology developed a number of micro-devices including a microchip which diagnoses HIV/AIDS within a few minutes. 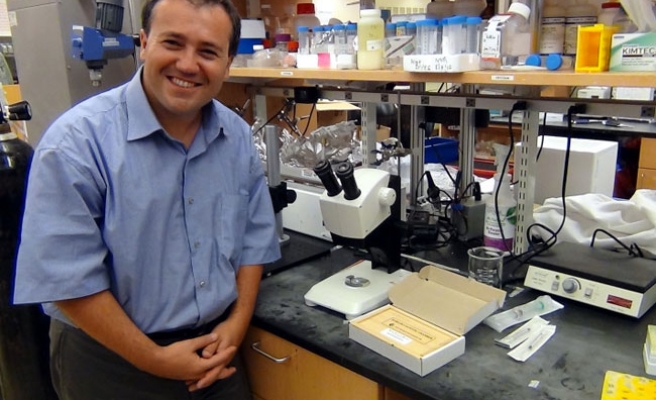 Cheap, portable and easy-to-use tests developed by a Turkish scientist in his laboratories at the Harvard Medical School and the Harvard-MIT Division of Health Sciences and Technology will be put into markets in coming years.

Assistant Professor Utkan Demirci of Medicine and Health Sciences and Technology developed a number of micro-devices including a microchip which diagnoses HIV/AIDS within a few minutes.

34-year-old scientist and his 40-member team at the Harvard Medical SchoolBrigham & Women's Hospital apply nano and microscale technologies to manipulate cells in nanoliter volumes to enable solutions to real world problems in medicine including applications in infectious disease diagnostics and monitoring, cell encapsulation and assembly for cryobiology, and tissue engineering.

Demirci further developed the microchip he invented in 2006 to diagnose AIDS, and tested it on 115 patience in Tanzania last year. Results of the tests were published.

Another microchip developed by Demirci and his team enables patients to determine their sperm count and quality in only 30 minutes.

Demirci received the Coulter Foundation Early Career Award in Biotechnology in 2007 and in 2009. He was also awarded by Nano-Biotechnology Award by the National Science Council of Turkey and The Turkish Industrialists' and Businessmen's Association (TUSIAD).

In 2006, he was selected to TR-35 as one of the world's top 35 young innovators under the age of 35 by the MIT Technology Review. He is one of the few recipients of the prestigious Full Presidential Fellowship given by the Turkish Ministry of Education. In 2004, he lead a team that won the Stanford University Entrepreneur's Challenge Competition and Global Start-up Competition in Singapore based on his doctoral work.