Destruction of arid lands largely due to development has resulted in a 46 percent decline in the bird population since 1968 in Utah, Arizona, New Mexico and other Western states 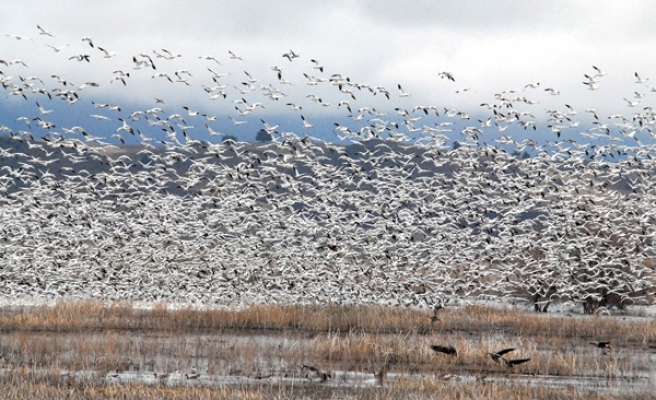 Bird populations across the United States are shrinking largely due to development, with the steepest declines in Western states, according to a scientific report released on Tuesday.

Described as the most comprehensive review ever of long-term trend data, "The State of the Birds 2014" sounds a dire warning about extinction if the United States doesn't change its course, but also praises conservation as a solution that works.

"Today, we have the science, technology and knowledge to prevent extinctions. Conservation works," said the report, authored by the U.S. Committee of the North American Bird Conservation Initiative - a 23-member partnership of government agencies and organizations dedicated to advancing bird conservation.

Destruction of arid lands largely due to development has resulted in a 46 percent decline in the bird population since 1968 in Utah, Arizona, New Mexico and other Western states, the report said.

Its release marks the 100th anniversary of the extinction of the Passenger Pigeon, once the most abundant bird in the United States whose mass migration of 1 billion birds in 1860 was said to measure 300 miles (480 km) long, darkening overhead skies and taking 14 hours to pass.

Within decades, hunting and forest clearing wiped out the population, and the very last Passenger Pigeon - a bird named Martha caged at the Cincinnati Zoo - died on Sept. 1, 1914.

It also included a 2014 Watch List of the 233 U.S. bird species most in danger of extinction and in need of immediate conservation help, including the White-rumped Swiftlet, California Gnatcatcher, Bristle-thighed Curlew and Sooty Grouse.

Hawaii, which has 33 species on the list, was deemed the "bird extinction capital of the world" by the authors, who said no place has had more extinctions since human settlement.

But all is not lost as long as steps are taken to protect wetlands, forests, coasts and other crucial bird habitats or to modify human practices, such as long-line fishing, which in the past resulted in the accidental catch of endangered Short-tailed Albatrosses.

Such conservation moves have saved the Albatrosses, Bald Eagles, Brown Pelicans, Peregrine Falcons and even the California Condor, whose population has grown to more than 200 today from just 22 birds in the 1980s, the report said.