Charla Nash, 57, who was photographed in her hospital bed at Brigham and Women's Hospital in Boston, appears dramatically different with a new nose, lips and facial skin. 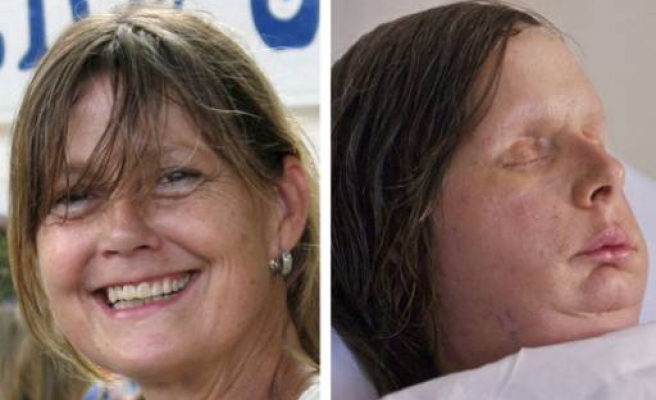 A U.S. woman who underwent a full face transplant in May after being mauled by a chimpanzee in 2009 revealed her new face in a photo released on Thursday.

Charla Nash, 57, who was photographed in her hospital bed at Brigham and Women's Hospital in Boston, appears dramatically different with a new nose, lips and facial skin.

"I will now be able to do things I once took for granted," Nash said in a statement.

Nash was hurt after a friend's 200-pound (91 kg) pet chimpanzee went on a rampage two years ago. She lost her hands, lips, nose and eyes, leaving her blind and disfigured after the attack. The animal was eventually shot and killed by police.

After undergoing a grueling 20-hour full face transplant at the hospital in May, Nash in the photo now has a fair, almost blushing, complexion.

Prior to the surgery, Nash was often photographed wearing a veil to hide her disfigurement.

Nash's full face transplant was the third surgery of its kind performed in the United States, all at the same hospital.

An anonymous female donor provided face, hands and other tissue material that made the surgery possible. The hand transplant was deemed successful but the hands did not thrive after complications from pneumonia and were removed.

Another hand transplant could be attempted if a suitable donor is identified, doctors have said.

Nash's face was rebuilt by a medical team of more than 30 physicians, nurses, anesthesiologists and residents in a challenging surgery made more complex by the double hand transplant.

The world's first full face transplant was completed in Spain in 2010.