WHO: Ebola spreading in Europe 'unavoidable'

Spanish health officials said four people had been hospitalised to try and stem any further spread of Ebola there after the nurse became the first person in the world known to have contracted the virus outside of Africa. 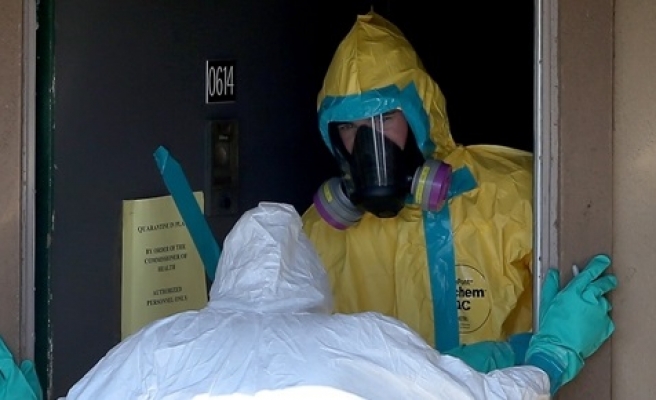 More cases of the deadly Ebola virus will almost inevitably spread in Europe but the continent is well prepared to control the disease, the World Health Organization's (WHO) regional director said on Tuesday.

Speaking to Reuters just hours after Europe's first local case of Ebola infection was confirmed in a nurse in Spain, the WHO's European director, Zsuzsanna Jakab, said further such events were "unavoidable".

Spanish health officials said four people had been hospitalised to try and stem any further spread of Ebola there after the nurse became the first person in the world known to have contracted the virus outside of Africa.

"Such imported cases and similar events as have happened in Spain will happen also in the future, most likely," Jakab told Reuters in a telephone interview from her Copenhagen office.

"It is quite unavoidable ... that such incidents will happen in the future because of the extensive travel both from Europe to the affected countries and the other way around," she said.

Several countries in the WHO's European region, including France, Britain, the Netherlands, Germany, Switzerland, Norway and Spain, have treated patients repatriated after contracting the disease in West Africa, where Ebola has been raging through Guinea, Sierra Leone and Liberia since March.

Ebola has infected some 7,200 people in West Africa, killing more than 3,400 of them in the largest outbreak of the disease in history. Cases have also been imported into Nigeria, Senegal and the United States.

Jakab said that within Europe, health workers caring for repatriated Ebola patients, as well as their families and close contacts, were most at risk of becoming infected.

"It will happen," she said. "But the most important thing in our view is that Europe is still at low risk and that the western part of the European region particularly is the best prepared in the world to respond to viral haemorrhagic fevers including Ebola."

Ebola, one of the deadliest diseases known in humans, can have an incubation period of up to 21 days and disease experts say it is only contagious when patients are displaying symptoms such as fever, vomiting and diarrhoea.

The infection is passed through direct contact with bodily fluids such as blood, vomit and faeces.

A study by scientists tracking the Ebola epidemic and airline traffic data predicted a high risk of the disease being brought into Europe unwittingly in people travelling without knowing they are infected.

With case numbers in the West Africa rising exponentially, experts say it is only a matter of time before Ebola spreads internationally, but they stress the chances of sporadic cases leading to an outbreak in Europe, the United States or elsewhere beyond Africa are extremely low.

The European Centre for Disease Prevention and Control (ECDC), which monitors disease in the EU, said on Tuesday that while there was a small risk of travellers bringing Ebola in without knowing it, the region's public health authorities "can efficiently detect and confirm cases of Ebola virus disease and thus prevent its onward spread".

Jakab said the WHO's European headquarters was keeping a close watch on events and was in contact with every country in its region.

"If they see any need for support or advice, we are always behind them. We are well prepared. I really don't think that at this stage we should be worried about these particular cases," she said, referring to the case of Ebola spread in Spain.

"This was to be expected," she added. "We expected it in other parts of the region - and it came in Spain, but it did not come totally as surprise."

Asked whether she would like to see screening at Europe's borders of travellers coming from the affected countries in West Africa, Jakab said she did not think it necessary right now, but it may be something to consider in future.

"I know the United States is planning to do that, but in Europe it has not been introduced yet," she said. "It depends how the epidemic develops (in the future). This might be an issue to take on board and consider."