How did Russians conquer Crimea from the Muslim Tatars?

The order was sent to deport the Crimean Tatars on the night of May 18, 1944. The Soviet Union's 'Red Army' soldiers ordered the Crimean Tatars to leave their homes after forcefully entering at night. Within two hours, before even being given the chance to take any belongings with them from their homes, they were rounded up in village, town and city squares. 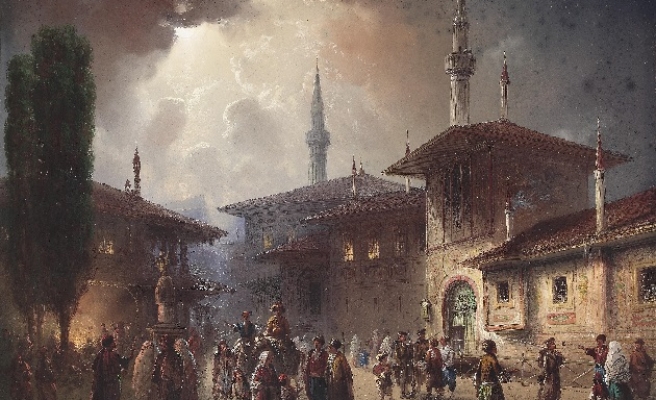 The history of the Crimean Tatars, whom are a Turkish-Muslim community in the Crimean peninsula, goes back as far as the sixth century. The Crimean khanate was set up after the disbandment of the Golden Horde at the beginning of the fifteenth century, and came under Ottoman protection in 1475.

Ottoman rule in the region lasted around 300 years and ended with the Ottoman-Russian war in years 1769-1774. At the end of this war, a peace treaty was signed that ended the Ottoman Empire’s protection over the Crimean khanate. After this, Crimea became independent, but in reality, as much as the khanate was claiming its independence, Crimea was pushed into an bloody internal conflict as the Russians pushed to abolish the puppet khanate.

Shortly afterwards, the Russian army went into Crimea they imposed their policies there, and thus, Crimea fell to Russian occupation in 1783, when the tsaritsa, Catherine II, announced in a manifesto that the Crimea khanate had come to an end and that its land had been invaded by Russia.

The tsaritsa stated in the manifesto that the Crimean Tatars would receive equal rights like everybody else, and that their persons, properties, estates, mosques and religious beliefs would be protected in addition to being allowed to benefit from all the rights and privileges present within the Russian Empire.

The decision to annex Crimea didn’t cause any serious uproar between the Crimean Tatars and the Russians. The reason for this was that the country was left in great crisis after long wars and internal conflicts. Additionally, Russia began pulling the upper-class Crimean Tatars to their side. As for the Ottoman Empire, they couldn’t stop the Russian annexation and was left with no other choice but to accept it.

Within a short while, the Russian administrative system started being implemented in Crimea. In 1784, the "Tavrida Oblast" was established on lands around Crimea and Taman. The new oblast (province) was made up of seven townships: Simferopol, Yevpatoriya, Perekop, Levkopol, Melitopol, Fanagoriya and Dnyeprovsk. Crimea’s new borders included Crimean Tatars and other ethnicities, as well as lands that had religious and economic relations.

One of the first objectives of the Russians was to change the population's balance and in turn try to erase the Tatars' Islamic culture in order to ‘Russianize’ the region. The first effort towards this was the changing of place names. For example, the province was given the new name “Tavrida”, which was attributed to an ancient Tavr community that lived in the time of Herodotus. Kezlev (which meant 'beuatiful house') was changed to “Yevpatoriya’’ (being related to Mithridates Eupator), and Kefe was changed to “Feodosiya” meaning Theodosia city. In the sisteenth century, Akmescit, which was established by the Crimean Tatars, was givien the Greek name “Simferopol”. A new fortified harbour city that was built by Russians on top of an old Tatar village called Akyar was given the old Greek name Sevastopol, meaning magnificent city.

With Russia being represented in the coat of arms of Tavrida, the symbols of the double headed eagle and the orthodox cross were used to show their transition from the Hellenism to Christianity. Crimean cities and townships later on arranged their crests in such a way as to signify their background as “Greek and Christian”, even though this completely ignored the history of the Turkish Muslims residing there.

By closing down madrassas, Crimean Tatar intellectuals were silenced. Crimea’s material artworks from its past history and culture were destroyed and its libraries were burnt down. In order to protect their own culture, hundreds and thousands of Crimean Tatar Muslims abandoned their homeland and fled to Turkey and Dobra due to the tsar's coercive politics and oppression. After this, the first mass migration people continued to until the end of the nineteenth century.

One of the major blows that the Crimean Tatars experienced within their cultural history was in 1929. The Bolsheviks seized all the surviving books that were written in the past century with the excuse that they were aiding them in their transition from the Arabic to the Latin alphabet.

After World War II, Soviet Union president Josef Stalin decided to exile the Crimean Tatars after accusing them of working with the Germans during the war. The order was sent to deport the Crimean Tatars on the night of May 18, 1944. The Soviet Union's 'Red Army' soldiers ordered the Crimean Tatars to leave their homes after forcefully entering at night. Within two hours, before even being given the chance to take any belongings with them from their homes, they were rounded up in village, town and city squares. Those who did not want to abandon their homes were taken away by force and those who resisted were killed.

Within three days, around 180,000 Crimean Tatars were exiled to various regions of the Russian Federation on train wagons normally used for carrying animals. 151,000 of them were sent to Uzbekistan. The Crimean Tatars were settled into towns and villages where there were factories and businesses for them to work in.

The Crimean Tatars' exile continued until 1987. Due to the Soviet government's reform of their harsh policies in 1987, 2,300 Crimean Tatars returned home. The following year, 19,300 Crimean Tatars were also allowed to return to their homes. After the Soviet government released a declaration on the November 14, opening the way for people to return back to their homelands, the migration back to Crimea sped up. In 1989, the number of Crimea Tatars who had returned reached 28,000. In the month of May 1990, this number increased to 83,000. After the dispersion of the Soviet Union, Crimea became a self-governing republic that attached itself to Ukraine.

According to statistics, in 1995 the number of people living in Crimea was 2.6 million. Out of this, 67% were Russian, 22% were Ukrainian, and 10% were Crimean Tatars, with the remaining 1% consisting of other ethnicities (Karaim, Kirimcak, Roman, Arminian, German, Bulgarian, and Jewish). The number of Crimean Tatars had reached 300,000.