How England's royals descend from Andalus

A report reveals that how the descendants of Zaida of Seville, an Andalusian princess, found their way into Buckingham Palace. 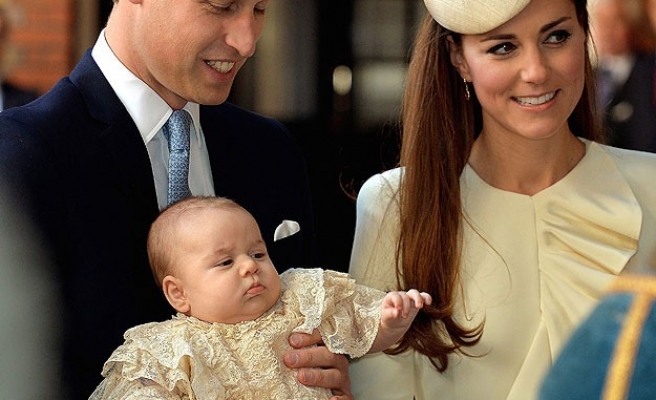 On July 22, 2013, the entire world tuned-in to witness the birth of a new heir to the English crown, George Alexander Louis, otherwise known as Prince George of Cambridge. As the first-born son of Prince William and Princess Catherine, the Duke and Duchess of Cambridge, he is the third in line to the throne after his grandfather Prince Charles and father Prince William, and thus the continuation of the House of Windsor.

Although English royal family no longer plays a direct role in running the kingdom’s affairs, it is one of the oldest, wealthiest and most influential royal families in the world, and genetically connected to a much wider network of European royalty that has survived since the medieval ages. Until 1917, the House of Windsor used their original name Saxe-Coburg-Gotha, indicating their Germanic roots, but as a result of the First World War against Germany, they decided to change their name to Windsor.

In fact, most of Europe’s royal families – including those of Greece, Denmark, Sweden, Russia, Austria and Spain – trace their bloodlines back to one another, and often find commonalities in the Catholic conquerors of the Iberian Peninsula (present-day Spain and Portugal), who brought an end to 900 years of Islamic civilization in Europe and expelled its Muslim and Jewish populations in the 15th and 16th centuries.

What is interesting is that as of Prince William, the forthcoming line of English kings and queens will trace their ancestry back to the Muslim Arabs who ruled the Iberian Peninsula between the 8th and 15th centuries, thanks to a certain woman known simply as Zaida of Seville.

Zaida of Seville was a Morisco (a Muslim who was forced to convert to Catholicism to escape persecution) who was born in the late 11th century in what is now southern Spain. There is a slight discrepancy regarding her identity. Some historians say that she was the daughter-in-law of Muhammad al-Mu’tamid, who was the king of Cordoba, while other historians say that she was in fact his daughter and therefore a princess of the Abbadid dynasty, which claimed lineage to the Prophet Muhammad (peace be upon him). Others say that she was not the wife, but the concubine of Al-Ma’mun, the king’s son, who bore him two sons of his own.

Nonetheless, when the Almoravids, a Berber dynasty from Morocco, invaded southern Spain in 1091, Al-Ma’mun was killed and Zaida was captured. After escaping captivity, she fled to Seville. However, Seville also fell to the Almoravids, so she had no choice but to seek refuge with the Catholic king of Castile, Alfonso VI, in northern Spain.

Alfonso VI took Zaida into his palace and made her his concubine. At some point, she converted to Catholicism and took on the name Isabel (Elizabeth). Alfonso VI was recorded to have had a number of children but only one surviving son, Sancho, who was known to be the son of Zaida. He also had surviving daughters, two of whom by the names of Sancha and Elvira may or may not have been Zaida’s children, as there is a discrepancy as to whether or not they are hers or in fact the daughters of a later wife by the same adopted name.

Sancho died when he was just 14 or 15 years old in 1108 during the Battle of Ucles, so the crown was passed onto his half-sister Urraca. However, if in fact Sancha and Elvira were Zaida’s children, her lineage continued through them. Zaida’s supposed daughter Elvira married Roger II of Sicily. As for Sancha, she was married to Rodrigo Gonzalez de Lara of Castile.

Through two hundred years of Sancha’s descendants, Princess Isabella of Castile (1355-1392), who was the daughter of King Peter of Castile, married Prince Edmund of Langley, who was the Duke of York and son of England’s King Edward III. According to the family tree records of the late Princess Diana, she is linked to the descendants of Isabella Castile via Lettice Shirley (1619-1655), who married the 7th Earl of Clanricarde, William Burke. This makes Princess Diana’s son Prince William, and grandson Prince George, direct descendants of Zaida of Seville, meaning that the future kings of England trace their ancestry back to the Andalusian Muslims.

Another report in The Local suggests that Princess Diana and her offspring also descend from Zaida via another ancestor, the French Queen Marie de' Medici (1575-1642), who was also a known descendant of Alfonso VI of Castile, although the report makes no explanation as to how exactly she was linked to Zaida.

Many historians have attempted to deny that Zaida ever took on the name Isabel, whereas others have claimed that she was not an Arab princess, but rather the daughter of King Louis VI of France, although chronologically speaking this is impossible. Although she was originally buried in Sahagun, her remains, along with her tombstone, were later moved to Leon in an attempt to cover up her existence. However, her grave is still found in Leon where the inscription on her tombstone reads in Latin, "H.R. Regina Elisabeth, uxor regis Adefonsi, filia Benabet Regis Sevillae, quae prius Zaida, fuit vocata", meaning "here lies Queen Elizabeth, wife of King Alfonso, daughter of Aben-abeth, king of Seville; previously called Zaida".

interesting. but, well, first, berbers clearly do not considered themselves as arabs. second, islamic ruled not 900 years on the spanish peninsula. nor did they ever ruled over the entire peninsula.