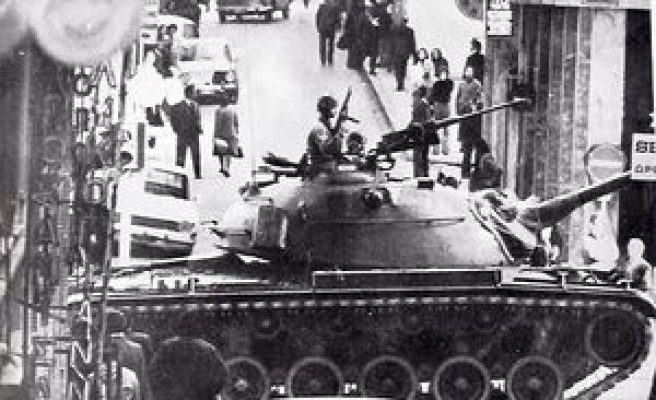 The recent coup d’etat in Egypt which ousted democratically elected president Mohammed Morsi, has brought up the question of whether nations which face military interventions benefit from them or not. The facts on the ground suggest that in many countries, the military has taken over authority for some time or forever, and was not able to overcome social, economic and political problems. Coup d’etats did not generate ultimate solution proposals to long-standing problems.

In 1980’s Europe, the military had a larger zone for political interference in many countries. One country in southern Europe, Spain, experienced a military coup attempt on the evening of 23 February 1983 when coup plotters raided the parliament in an attempt for a coup d’etat; the television station in the building broadcasted the events live.

Lieutenant Colonel Antonia Tejero, the leader of attempted coup, entered to the Spanish Congress of Deputies, the lower house of the Spanish Parliament, with 200 Guardia Civil and soldiers and held the deputies hostage for some 22 hours. Other brigades of the military were quick to join the coup attempt as they heard about it. As a response to this undemocratic move King Juan Carlos I gave a nationally televised address denouncing the coup and urging the maintenance of law and the continuance of the democratically elected government. The following day the coup leaders surrendered to the police.

Tejero was the last of the coup leaders to be released from jail on 2 December 1996, having then served 15 years in the military prison although he was sentenced to 30 years.

In another southern European country, the military achieved in overthrowing the democratically elected government and suspending the constitution, unlike in Spain. On April 21, 1967 residents of the Greek capital Athens woke up with a distressing roar in the streets. As marches were broadcasted on radio channels, 4 tanks were on their way to siege the parliament. A junta led by mid-ranking officials Nikolaos Makarezos, along with fellow Colonel Georgios Papadopoulos and Brigadier Stylianos Pattakos, overthrew the government of Panagiotis Kanellopoulos. The junta announced the military has decided to take over control of the country within a plan called prometheus. After the coup, which was said to be carried out against underground communist expansion within the Greek state, critical posts in the government were occupied by military officials. Individual rights and freedoms were suspended and thousands of political activists were unfairly detained with allegations of being leftists. On the first day of the military rule, the number of arrested peoplehad already reached 10 thousand. Andreas Papandreu, a leftist politician and former minister in the ousted government, was sentenced for 9 year prison for charges of regime change.

All these policies and the violent crackdown on society paved the way of decline of popular support to the Junta government. In an attempt to restore the military’s prestige, the Greek junta plotted a military intervention in Cyprus through which Nikos Sampson, a nationalist politician and former journalist becamede facto leader of the island. Yet, unlike its intended effect, the last move during the end of the Greek junta occurred when Turkey interfered in Cyprus militarily as the threat to the existence of Turks on the island was grew in 1974. After Turkey’s operation, military rule ended in Cyprus, therebt also putting an end to the Greek junta. After 1974, expelled Prime Minister Karamanlis and King Konstantin returned to Athens.

In 1978, Marxist military colonels supported the Afghan Democratic People’s Party in seizing power and killing Afghanistan’s first President Mohammed Davud Kahn with his family. Just after one year, another coup was staged after a 4-hour clash in the capital Kabul in which Nur Mohammed Taraki, the leader of Revolutionary Council, was killed. Hafızullah Amin, one of the prominent organizers of the coup became the new leader of the Afghans.

Yet he was not able to survive in power and was forced to leave the post in December as Islamic resistance against his rule grew.

This time, a communist leader of the Democratic People’s Party Babrak Karmal came to power after a coup backed by Soviet leaders who sent troops in support of Karmal to stay in power, a move which started a 30-year Afghan war.

The huge oil reserves found in the middle of the 1940’s have strategically changed the role of Saudi Arabia in global politics. Despite large oil revenues, Saudi Arabia did not achieve to have a functional economy and was on the edge of bankruptcy. When King Abdulaziz ibn Saud died in 1953, the crown prince Saud  had to deal with the enormous amount of public debt he inherited from his father’s era. The tendency of King Saud to luxury expenditure exacerbated the problem.

The public and foreign debt of the country reached $200 million in 1953 whereas it hiked to $450 million in 1958. Feeling the threat of bankruptcy, the aristocrats, religious class and members of the royal family decided to bring Faisal to the prime ministry, igniting a struggle between the two brothers, Faisal and Saud. As corruption and nepotism weakened the state economy day by day, Prince Faisal found the chance he had been seeking for a long time in 1962 when the King travelled abroad, and Faisal established a new government and did not let Saud's sons to be in the cabinet.

After Saud returned to the country, he rejected the new government and threatened Faisal with guardians of the Royal army. In response, Faisal reacted to his brother by ordering the national army to move against the King. With the mediation of religious people, the crisis was settled. The Saudi royal family pressured Saud to leave the crown to Faisal. Saud was expelled to Sweden as his brother embarked to re-organize the state institutions left over from Saud’s era.

Turkey gets familiar with the coups

During the Cold War years, Turkey was also among the countries in which the threat of military intervention hung over the democratic systems. After the first fair multi-party elections in 1950 in which the Democrat Party swept the polls, economic hardships started to hurdle people’s daily lives. Economic problems like high inflation compounded by political pressure eventually created an appropriate ground for a military intervention. On 27 May 1960, Turks listened from their radios to the announcement that the Turkish army had withdrawn the government of Adnan Menderes. The military official who made the radio address was Alparslan Türkeş, founder of the National Movement Party. The military established a special court on Yassıada island in the Marmara Sea and unfairly took the decision to execute Prime Minister Menderes, Foreign Minister Fatin Rüştü Zorlu and Finance Minister Hasan Polatkan.

Another major blow to Turkish democracy occurred on March 12, 1971 when the Turkish military delivered a memorandum to President Cevdet Sunay to put pressure on the government to resign. Süleyman Demirel who was prime minister at that time left his post to Nihat Erim, a military backed politician who formed a coalition from different parties. However, he was not able to run the country sufficiently and Demirel got the prime ministry one more time.

At the end of the 1970’s, Turkey was scrambling to overcome economic difficulties, with the situation in the country worsening as political violence spread, causing deep political instability. Tanks were again on the streets of İstanbul and Ankara on the morning of 12 September 1980. The Turkish military intervened in politics, seizing power and dissolving the parliament which was unable to reach a consensus to elect a president after 114 voting. The chief of staff Kenan Evren became the new president.

In 1997, Turkey was introduced to a new term, a post-modern coup which was used to define the withdrawal of an elected government through the pressure from high-ranking military commanders in collaboration with the president. On 28th February, the coup process started when the decisions taken in National Security Council meeting were announced to public. At the end, Prime Minister Necmettin Erbakan was forced to resign on 18 June. A new coalition made up Mesut Yılmaz, Bülent Ecevit and Hüsamettin Cindoruk replaced the democratically elected government. The coalition was among the worst ones in the Turkish Republic’s history. In its term, Turkey went through a severe economic crisis in 2001. Finally in 2002, the coalition lost elections and the leaders had to quit active politics.

In 2012, a special commission was formed in the parliament to investigate the coup d’etats, including February 28. The trials and investigations are still ongoing.