The abolition of the Caliphate in 1924 was the turning point; drastic reforms were introduced to undermine the power, visibility and influence of Islam in all aspects of life. 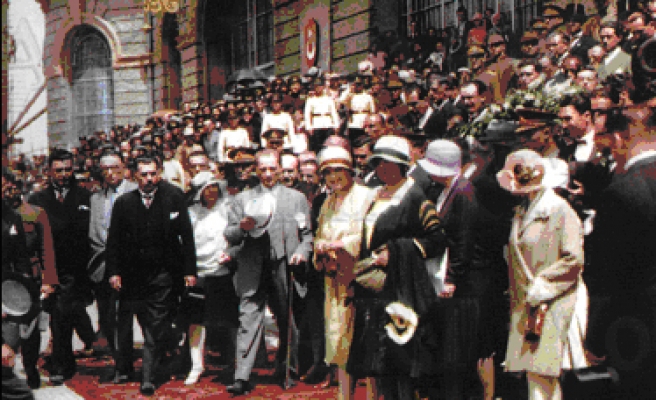 The actualization of the top-down secularization and westernization project during the first three decades of the Turkish Republic targeted the established Islamic codes in the political and social sphere. Before 1924 we see a figure of Mustafa Kemal hand in hand with religion, making quotations from religious sources and praising Islam and the men of religion. He presented himself as a politician who had absolute respect for and loyalty to Islam.

The abolition of the Caliphate in 1924 was the turning point; drastic reforms were introduced to undermine the power, visibility and influence of Islam in all aspects of life. The most well-known reforms of this period included the outlawing of the madrasas and the tariqas (1924), the change in dress codes (1925), the adoption of Western legal systems (1926), the use of the Latin alphabet (1928) and the removal of Islam from the Constitution as the religion of the state (1928).

Theological Construction of the Republican Elite

This immense attack on Islam and the traditional way of life continued in the 1930s. The application of ethno-racial Turkish nationalism was quick and profound; in 1931 M. Kemal wrote a letter to the directorate of the Turkish History Research Committee and made recommendations on how the secondary school books should be written:

“The Arabs that occupied the sandy deserts of the Arabian Peninsula, and who grounded themselves on the sophistry of “Iqra bismi Rabbika ( Read, by seeking the assistance of thy Lord)”, could not have caused more distortion than they did upon the civilized world, specifically in the rich and civilized Turkish zones, by basing themselves on principles that are the symbols of the primitive age of ignorance.”

As can be seen M. Kemal describes the first Quranic verse as a symbol of primitiveness and ignorance. Furthermore, he accepts Islam as something that is not only peculiar to Arabs, but that will also be detrimental in the formation of the “civilized Turkish nation.” Consequently, he took a clear positivist stance against Islam and advised this stance in the writing of history. In turn, the Committee in 1931 followed the recommendations of M. Kemal, and presented a clear positivist interpretation of Islamic history in the school books that were written during that period. For instance, in the section of “First Revelation” in the history textbooks of the time it was argued that:

“The first verses that were uttered by the Prophet are in fact not known to be what they are indefinitely. Muhammad rather stated verses that were the by-products of a long period of contemplation and in accordance with the needs of the time.”

The attempts to Turkify the azan (Holy Call to Prayer) and salah reflected the same vision. The ruling elite forced the azan to be called in Turkish instead of Arabic (from 1932 to 1950). Regarding salah, they wanted people enter mosques with their shoes on and to perform the prayer while seated, resembling Christian rituals; yet they were unable to convince people and could not put it into practice.

In 1937, M. Kemal expressed clearly in the opening of the Turkish Grand National Assembly that:

“It is well known world-wide that our main program in the administration of the state is the program of the Republican People’s Party (RPP). Indeed, the principles we follow are the main lines enlightening us in the administration of Turkey. But, these principles should not be equated with the dogmas of books that are supposed to be revealed from the sky. We take our inspirations not from sky or the invisible world, but directly from life.”

These statements were illustrative of the extent of the Kemalist de-Islamization Project in the 1930s. Following his death in 1938, İsmet İnönü became the next President and the rigid secularization, as well as ethno-racial nationalism, continued during his rule without any alleviation.

The change in the global balance of power and the beginning of the Cold War forced Turkey to be on the side of the Western Bloc, which demanded Turkey to make a transition from one-party rule to a multi-party democracy. The Republican leadership had no choice but to accept this transition and democratic elections were held in 1946, a paradigm shift in the country as the Republican elite had to check and balance their policies in accordance with the will of people. In the 7th Congress of the RPP in 1947 it was suggested that it would be impossible to collect votes from the people, unless the rigid policies regarding religion were eased and altered.

Although religion was still very much embedded and powerful in the society, the Republican reforms between 1923 and 1946 had been detrimental to the Islamic heritage of the country. In this 25-year period, Turkey had moved from the homeland of the Caliphate to a country that lacked a sufficent number of Imams with the ability to wash the bodies of the deceased. It is fair to argue that unless democracy had been introduced into Turkey, Islamic culture could have died out in the decades that followed, as was the case for all post-Soviet Muslim countries.

The 1950s under the Menderes government brought an easing view towards religion that relaxed the strict control of the government upon religion. Without doubt, the most outstanding change was the return to the recitation of the azan in its original language of Arabic in 1950. Yet the DP government was toppled by a military coup in 1960, restoring the Kemalist ideology and CHP rule in the country. This time, however, the attitude towards religion was more balanced and accommodating compared to the practices of the 1930s and 1940s. In 1962, the state minister Hıfzı Oğuz Bekata, who was in charge of the Diyanet (Directorate of Religious Affairs), delivered a speech about the new roles of the “enlightened” religious men; he asserted that there would be no progress if the state clashes with imams and thus the government should cooperate with imams and teachers. Reflecting a direct reference to the positivist views of Mustafa Kemal, these statements show that the RPP relied on the Mustafa Kemal of the early 1920s instead of the 1930s, a result of the legitimization problem of secularism and secular nationalism in a multi-party democratic regime.