The Sykes-Picot treaty: A century of sharing in the Middle-East

Adana and Mersin were being given to France along with the edge of Syria. Provinces Basra and Baghdad, the Haifa and Akka harbours were being left to Britain. This way the shared usage of the waters of the Tigris and Euphrates was being guaranteed. Alexandria’s free harbour and Palestine were becoming an international region. 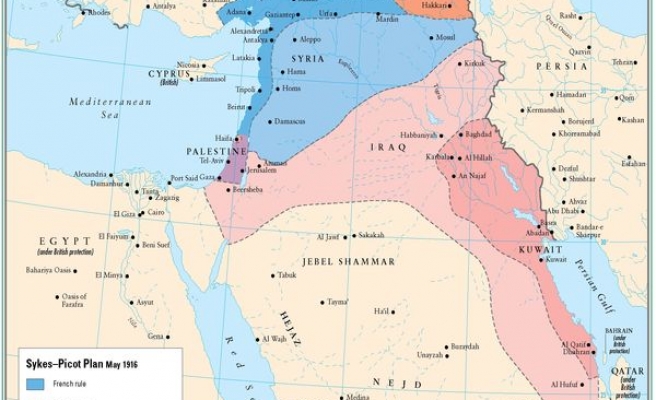 Sykes-Picot is the secret agreement regarding the sharing of the Ottoman Empire’s Anatolian and Middle Eastern lands between Britain and France with Russia’s approval via letters between 9-16 May 1916. Since it was an agreement on which François Georges Picot signed the agreement for France and Sir Mark Sykes signed for Britain. The contract would be known by their names. This contract would have lasting effects on the fate of the lands mentioned.

After the war of independence, the Republic of Turkey was founded. Although the Sykes-Picot agreement was not fully met, it is still one of the many examples of the “divide and conquer” mentality which was acted upon, since along with the lands mentioned in the National Pact of 1920, the land was split by Western powers with rulers at their desks and small countries were created in the form of mandates.

Many of the world’s most important and strategic points and passage ways such as the Bosphorus and Gallipoli Strait, the Suez Canal, the Bab al-Mandeb Strait, Hormuz Strait and the Basra Gulf became a focus for firstly, Britain and other oppressive powers due to the energy fuel oil which had become an important source of energy from the beginning of the 20th century.

Britain had been making plans to take over the area and they came in contact with Makkah’s Sharif Hussein who had got into power in the year 1909. Since 1909, he had threatened the Ottoman government with the betrayal of Arab tribes and lusted after power. After the involvement of the Ottoman Empire in the First World War, the meetings became more frequent and they worked hard to make the Arab families and tribes to revolt.

In the meetings, all of Sharif Hussein’s Arabian Peninsula, Syria and Iraq, excluding Lebanon, which Britain supported, were agreed to be handed over. These ideas were told to France in November. In December of the same year, the Amir of Najd, Ibn Saud, made an independent treaty concerning all of the North of the Basra Gulf, excluding Kuwait. In other words, on the land which was promised to Sharif Hussein, the Amir of Najd Ibn Saud introduced his rule. With this type of hypocritical politics, Britain planted seeds of hate between the people of the lands.

In 1916, the battles on the Iraq front were still continuing and the Ottoman forces, led by commander Halil Kut Pasha, won a great victory over the British at Kut-al-Amara. The Sykes-Picot agreement was a consequence of this victory after meetings between France and Britain to divide the Middle East. According to this agreement; “Adana and Mersin were being given to France along with the edge of Syria. Provinces Basra and Baghdad, the Haifa and Akka harbours were being left to Britain. This way the shared usage of the waters of the Tigris and Euphrates was being guaranteed. Alexandria’s free harbour and Palestine were becoming an international region. The Arabian land was divided by a line named “Akka-Kerkuk”. The North part was given to France and the South was left to the English population. The French portion reached the Iranian borders and included the Mosul province. Britain’s influenced regions covered a large area from Palestine to Mesopotamia. Britain and France were committed to Arab governments in their regions and to protect them. On the other hand, the regions covering Bitlis, Erzurum, Trabzon and Van were being given to Russia.” In this way, Britain was sharing the lands it had promised Sharif Hussein with France.

Unaware of this agreement, Sharif Hussein began the revolt against the Ottoman Empire on June 1916 with the dream of a “Great Arabian Kingdom” in mind. This event was going to be written in textbooks later, it was to cause unrest amongst Muslims and it formed the foundation of the “Great Arab Revolt” of which the Western forces whispered in the ears of many. Only, the reality was very different. This reality was described by Feridun Kandemir who was present from the beginning of the war in Hejaz and resided in Madina, in his work titled “ An Apology From Madina: The Last Turks in the Shadow of Our Prophet”:

“But what was the reason behind the revolt? Did the Arabs want freedom? No, the Arabs fought side by side with the Turks in every battle since Canakkale. In fact, in our War of Independence, in the battle of Aydin, there were Arabs who gave their lives fighting the Greek with our Mehmetcik’s (Mehmetcik is a name referred to any enlisted man in the army). And in the first World War, there was not a single revolt by the Arabs against the Turks in any Arab residential area, not in Iraq, not in Syria, nor in Lebanon and nor in Palestine. The only one who revolted was the Sharif of Makkah, Amir Sharif Hussein... The Arabs Sharif Hussein used in this revolt were nomadic people in the deserts of Hejaz and lived by looting. They were uneducated, ignorant and poor Bedouins. Arabs from cities and county’s such as Makkah, Taif and Jeddah did not join the revolt and Sharif Hussein did not attempt to take them in as soldiers. The Bedouins and Sheikh's did not know anything beside money, due to their own poor wealth. The English knew this just as Sharif Hussein did and were able to benefit only from these people using the power of money. And the revolt was continued till the end with them.”

The Sykes-Picot treaty was found out with the uncovering of the Tsardom’s secret documents after the 1917 Bolshevik Revolution in Russia. This Sykes-Picot agreement formed the foundation of the accepted borders in the Lausanne treaty and was still written during the First World War. This, along with decisions which complete these sorts of treaty’s made artificial borders between Muslims, dividing them by imposing nationalism, denominationalism, tribalism and material gain. The formation of mandate states such as Iraq, Syria, Jordan, Kuwait and the Kingdom of Hejaz without weighing the social, political and cultural scale has led the region into a century of blood, tears and chaos which still continues today.