"Were they pirates, or were they warriors for Islam? For centuries, historians have debated the significance of one of the most stirring episodes in the history of Britain’s Muslim minority..." 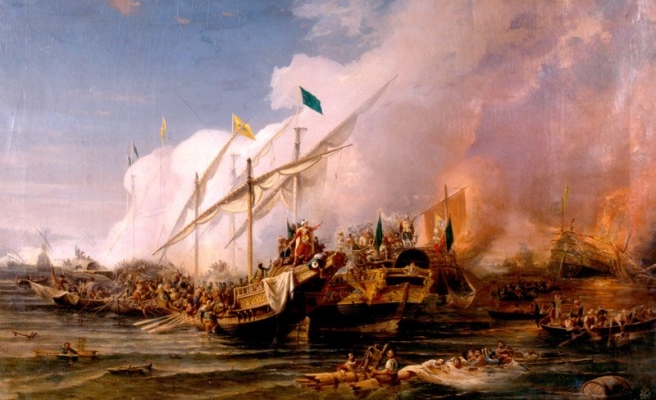 Were they pirates, or were they warriors for Islam? For centuries, historians have debated the significance of one of the most stirring episodes in the history of Britain’s Muslim minority. Men such as Captain John Ward of Kent astounded their compatriots by proudly adopting Islam to fight the Inquisition and the expansionist powers of Europe. Contemporaries called such men ‘corsairs’; they themselves considered themselves mujahidin. Some were among the most pious Muslims this country has yet produced. Others were famous drunkards and lechers.

Ward and his likes were described by the adventurer John Smith. Later to be Disneyfied thanks to his romance with Princess Pocahontas, Smith was one English traveller who saw these Muslims at first hand, having spent some years in the Ottoman army before sailing to New England. He wrote a book, the True Travels and Adventures, to describe the European Muslims who were fighting for the Crescent against the Cross. Leading the list were men of Holland and England, who, disgusted by religious wars in their own countries, and unpersuaded by Trinities and Vicarious Atonements, ‘took the Turbant of the Turke’. ‘Because they grew hateful to all Christian princes,’ Smith observed, ‘they retired to Barbary.’

Smith was firmly of the opinion that the pirating lifestyle was introduced to the Barbary States by these Europeans, ‘who first taught the Moors to be men of war.’ His compatriots were well aware of the names of the seaborne mujahidin, particularly Captain Danseker and Captain Ward, among the most skilled seamen in the annals of English history, who placed their gifts at the disposal of emirs and sultans, and whose swashbuckling exploits Smith was able to retell in hair-raising detail.

Until the arrival of these European adventurers, the coastal ports of North Africa had been unused to war. They had, however, found new prosperity as the home of Spanish Muslims expelled by King Phillip III in 1610, an event that was perhaps the greatest act of racial brutality seen in Europe prior to the Nazi Holocaust. Most Moors knew little of the sea, and still less of the infernal arts of gunpowder; but they welcomed Muslims from the Mediterranean lands, and from the seafaring nations of the North, who were willing to accept Islam in exchange for military service with the Spanish exiles. By the middle of the sixteenth century, English Muslims were at the forefront of this movement, ranging the seas to capture first Spanish, and then any Christian ship, enslaving the crew, and selling the cargo as spoils of war.

Horrified priests regularly emerged from the churches of Algiers, Tunis and Sale, to witness the regular conversion celebrations in the streets. They report that slaves who converted would accept Islam in a simple ceremony in a mosque; but free men and women would do so at the tomb of a local saint, to which they would be led in a great public procession, preceded by a military band. Riding a horse, and holding an arrow in his hand to symbolise commitment to the Jihad, a newly-circumcised Englishman would then learn the basics of the Qur’an, and apply himself to his new vocation. Only a minority took to the sea; others are known to have made a living as tailors, or butchers, or even as imams of mosques. To this day there is a building in the Moroccan town of Sale known as the ‘Englishman’s Mosque.’

Most of these individuals took the secret of their lives with them to the grave. Thanks to the Spanish Inquisition, however, historians have access to information about a good number of them. Those who returned to a seafaring life ran the risk of recapture and interrogation by the Inquisition’s priests, and it is from the Inquisition’s meticulously-kept records that we know the details of their conversion, and, often, their tragic fate.

One Inquisition court, in the year 1610, investigated no fewer than thirty-nine Britons. Twelve of them were from the ports of the West Country. Ten were Londoners; six were from Plymouth, and others originated in Middlesbrough, Lyme, and the Channel Islands. In 1631, the Inquisition in the Spanish city of Murcia tried one Alexander Harris, who as Reis Murad had become a prominent Muslim seafarer. He was convicted, forced to convert to Catholicism, and sentenced to seven years as a galley-slave. Another unfortunate Englishman was Francis Barnes, who admitted to the inquisitors that he had faithfully prayed and fasted ‘in the Mahometan manner’ while working as a ship’s pilot at Tunis, where he was captured by Spanish raiders. In 1626, Robin Locar of Plymouth, also known as Ibrahim, was captured by Tuscan galleys and convicted of practising Islam. Captain Jonas of Dartmouth, known as Mami al-Inglizi, was yet another victim of these dreaded Spanish raiders.

An interrogation by the Inquisition was meant to be terrifying. One survivor, the Plymouth Muslim Lewis Crew, described how the priests, after using various forms of torture, would ask the Muslim captive whether they would accept papal teaching on six issues. Firstly came the Trinity, as the main point at issue between Islam and Christianity. Second was the perpetual virginity of Mary. Third was the Immaculate Conception. Fourthly, questions would be asked about the doctrine of Purgatory. Fifthly, the accused would be required to demonstrate his orthodoxy on the doctrine of papal supremacy. Finally, the Sacraments of the Catholic Church would be the subject of a complex investigation, which no doubt confused the simple sailors who made up the majority of the Inquisition’s convicts. Like many others, Crew had steeled himself for a religious debate of the kind held in public between converts and Christians in Algiers; he found, however, that the Inquisition was interested only in enforcing orthodoxy, not in justifying it.

The Inquisition’s writ counted for nothing in Protestant England; but even here, those Muslim sailors who returned to their homes could face interrogation and martyrdom. Sir Walter Raleigh, commenting on the gravity of the problem, recorded that ‘Renegadoes, that turn Turke, are impaled’, and this seems to have been the usual punishment for such men. Three English martyrs are known in the year 1620, while in 1671, a Welshman was put to death by impalement after refusing to reconvert to Christianity. Archbishop Laud was so concerned by the Muslim presence that he instituted a miniature English version of the Inquisition. His ‘Form of Penance’, enforced in 1637, laid down strict rules to ensure the sincerity of reconversions to Christianity, including the use of penitential robes and white wands borrowed directly from Catholic practice.

Despite the best efforts of the inquisitors, the corsair cities continued to thrive. By the end of the sixteenth century, the number of Englishmen and other Europeans who had joined this adventure had become enormous. Diego de Haedo, a Benedictine priest, estimated that by 1600, half of the population of Algiers was made up of European converts and their descendents. Later, Voltaire was to remark on ‘the singular fact that there are so many Spanish, French and English renegades, whom one may find in all the cities of Morocco .’

Most of the corsairs were of humble origins. A few, however, were well-known in their own lands. One such was Sir Francis Verney (1584-1615), who ‘turned Turk in Tunneis’, and was later captured and served for two years as a galley slave as a punishment for his conversion.

But perhaps the two best-known English corsairs were the celebrated sea-dogs John Ward and Simon Danseker. A seventeenth-century ballad heard throughout the taverns of England sang that

All the world about has heard
Of Danseker and Captain Ward
And of their proud adventures every day.

Ward, in particular, rose in the public eye until he became the best-known English pirate since Sir Francis Drake. Born at Faversham, he spent his teenage years working the fisheries. Late in the reign of Queen Elizabeth he joined the Navy, where his rebellious temperament impelled him to the unofficial capture of a ship rumoured to be carrying the treasure of Catholic refugees. The ship turned out to be empty of treasure, but the enterprising Ward used her to capture a much larger French ship off the south coast of Ireland , and to vanish from the Navy for good.

It was in this ship, which he called the Little John to drive home his image as a kind of latter-day Robin Hood, that he sailed to Tunis, hoping to join the campaign against the Catholic nations of the Mediterranean. He found favour with Kara Osman, the commander of the local janissary garrison, and at some point joined Islam.

His maritime prowess soon put him, according to a French report of 1606, in command of over five hundred Muslim and Christian volunteers. Among these were Captain Samson, in charge of prizes, Richard Bishop of Yarmouth (Ward’s first lieutenant), and James Procter of Southampton, who served as his gunner. Perhaps his greatest seaborne achievement was the capture of the Venetian galleon Reinera e Soderina, displacing 1500 tons, whose treasure amounted to over two million ducats.

By the second decade of the seventeenth century, Ward was master of the central Mediterranean. Another ballad has him send the following message to James I:

Go tell the King of England, go tell him this from me,
If he reign king of all the land, I will reign king at sea.

Life in Tunis, as in the Muslim world generally, was more refined and comfortable than its equivalent in Europe, and despite several offers, Ward showed no sign of yearning for his home shores. He built a palace, described by William Lithgow, the Scottish raconteur who passed through Tunis in 1616, as ‘a fair palace beautified with rich marble and alabaster stones. With whom I found domestics, some fifteen circumcised English renegades, whose lives and countenances were both alike. Old Ward their master was placable and diverse times in my ten days staying there I dined and supped with him.’ Another visitor, Edward Coxere, reported that Ward ‘always had a Turkish habit on, he was to drink water and no wine, and wore little irons under his Turk’s shoes like horseshoes’.

When Ward died of the plague in 1622, England seemed to be in two minds about him. There were many who hailed him as the scourge of the Papist navies, or as a man of humble origins who rose to humble the rich and powerful. Others found it harder to accept him, because of his voluntary conversion to Islam, and his adoption of Turkish ways and values. He was ‘the great English pirate … it is said that he was the first that put the Turks in a way to turn pirates at sea like himself’. But he was not soon forgotten. Later generations of English Muslims, both at home and in North Africa, admired him as a superb mariner, fearless in battle, and a doughty warrior for the Crescent against those who expelled the Moriscos, and sought to impose their implacable and cruel customs on the free lands of the South, where church, mosque and synagogue coexisted for centuries, and where humble birth was no barrier to glory.