Hundreds of South Sudanese are taking shelter in the Catholic Church in Malakal. 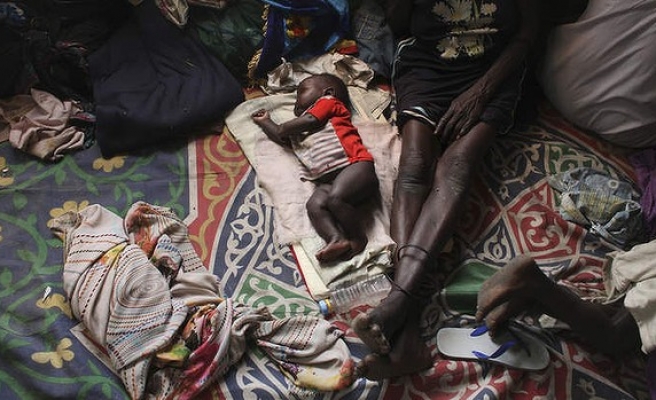 "Many people have arrived in the Catholic Church seeking refuge. They are about 1,500 while in the hospital they are now 700," Upper Nile Information Minister Philip Jaben told Anadolu Agency on Sunday.

"The problem now is that the rebels go to those places and pick them and go and kill them," he claimed.

The official also suggested that rebels were attacking homes and killing people inside.

"Other people are continuing to cross the Nile (river) to the western bank but it is difficult as many are attacked and killed in the water," Jaben went on to say.

Both the Catholic Church and the hospital have already been scenes of alleged killings this week.

Ten people were reportedly killed last Wednesday in the church and 7 others in the hospital by rebel forces when they were gaining control of the town.

The South Sudanese government admitted on Friday that rebel forces were in control of the town of Malakal.

The country has been shaken by violence since last December, when President Salva Kiir accused Machar of standing behind a failed coup attempt against his regime.

The strategic, oil-rich city of Malakal has changed hands more than once since the conflict began more than two months ago.

Many of the city's buildings have been destroyed and government facilities vandalized. Its main marketplace – along with numerous shops, offices and banks – has also been ransacked.

Minister Jaben said the situation was worsening inside Malakal.

"The rebels are continuously violating the cessation of hostilities agreement signed with the government," he charged.

"They are killing innocent people. They collect children and women and murder them in cold blood," he alleged.

A spokesman for the rebels was not immediately available for comment.

The government official, meanwhile, said fighting continued to rage in the provincial capital.

"The fighting is going on in the middle of the town as our forces are trying to avoid destruction of the buildings and are using small guns," he added.

Jaben suggested that government troops were slowly edging on the rebel forces.

"Yesterday, they tried to come out of the town towards the army but were chased back in and have now escaped to the southern zone of the town," he said.

When reached for verification, the Sudan People's Liberation Army (SPLA) spokesperson Col. Philip Aguer said they were still waiting for information from the ground.

"I am still waiting for an update from the field commander and I will pass on to you," he told AA.