Amid carnage of war, Syria readies for Assad re-election 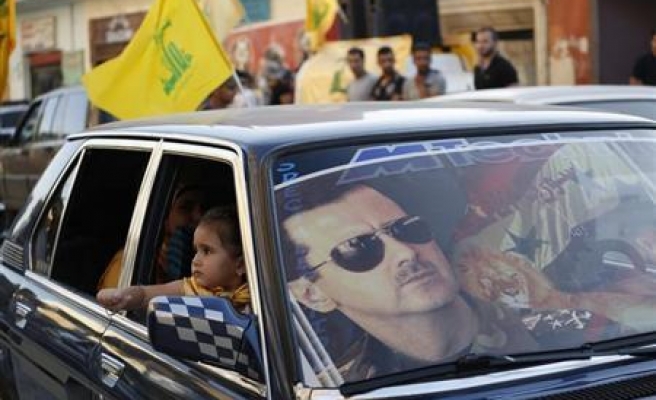 After three years of grinding conflict, the destruction of whole city districts and an exodus of refugees all triggered by an uprising against his rule, Bashar al-Assad is quietly preparing to be re-elected.

The Syrian president has not yet announced whether he will stand for a third term, in defiance of protesters, rebel fighters and Western foes who have demanded he go; but in state-controlled parts of Damascus preparations for his candidacy are unmistakable.

Public gatherings have become platforms to urge the president to nominate himself, despite a continuing civil war that has killed more than 140,000 people, fractured the country and destroyed any chance of a credible vote being held.

Authorities are once again organising demonstrations in support of Assad, accused by opponents of massacres of civilians. Shopkeepers are encouraged to show their support by painting national colours on their store fronts.

Some express their loyalty in general displays of patriotism, while others explicitly call on the 48-year-old president to announce he will stand in the vote, which is due to be held by July.

Just 18 months ago, Assad's grip over his capital seemed to to be slipping as rebels gained ground around Damascus. Since then his forces have consolidated control in central Syria. Rebels still insist his departure is precondition for any peace deal, but having lost military momentum they are unable to dictate terms.

At a gathering in southern Damascus last month to honour victims of Syria's conflict, local officials and clerics turned the solemn memorial into a political rally.

After handing out awards to widows and grieving mothers in Sayida Zeinab, a suburb of the capital which has been at the heart of Assad's counter-attack against rebels, they made their case for a third term of Assad rule.

"The president said: 'If there is a popular demand for me to be nominated, I will run. I will not abandon my national duty'," said Shi'ite Muslim cleric Al Sayyed Fadi Burhan.

"So I ask you to take advantage of this large gathering ... and make it an opportunity to ask President Bashar al-Assad to nominate himself for another electoral term."

The scene is repeated across government-controlled districts of the capital, such as the garrison suburbs where military families live, many of them from Assad's minority Alawite sect, an offshoot of Shi'ite Islam.

Demonstrators waving portraits of Assad and flags adorned with his face are once again on the streets, albeit in smaller numbers than the many thousands who rallied in 2011 when authorities were trying to counter the mass anti-Assad protests sweeping the country.

Schoolchildren are bused in to take part in marches, much to the alarm of parents who say they are given no prior notice that their children are being taken to demonstrate while Syria's civil war rages on.

"Even though it can be very dangerous, they just put them on a bus and take them to a march during their last period of the day without informing us or anything," the mother of an 11-year-old boy said.

"If they inform us, they know that most parents would not send their kids to school that day."

"It is his personal decision ... but I assure you that the Syrian street will pressure President Bashar al-Assad to nominate himself for the presidency of the republic," Information Minister Omran Zoabi said in January.

Amendments to Syria's constitution agreed in a referendum two years ago mean that, for the first time, rival candidates would be able to stand against Assad - but only if they win the support of 35 members of Syria's pro-Assad parliament.

That would at least in theory mark a change from four decades of presidential votes when the only options Syrians had were to support or oppose parliament's nomination of Assad and, before him, his father Hafez al-Assad.

Monzer Akbik, chief of staff to opposition National Coalition leader Ahmad Jarba, said Syria had not held a real election since Assad's Baath Party seized power in 1963 and any vote held in current circumstances "would be a joke".

"If he does want an election, he will make it a theatre - with an orchestrated opposition," Akbik told Reuters in Turkey. "Any serious opposition candidate would be immediately killed if they were to go inside Syria. Who dares run against Assad?"

Jarba's coalition has held two rounds of unsuccessful talks in Geneva with government negotiators, aimed at resolving the civil war. The opposition and international mediator say the talks must address a transitional government - a phrase Assad's opponents understand to mean that he must go.

But Syrian officials have categorically ruled out that he might surrender any power.

In response to the pro-Assad mobilisation, an online campaign to nominate popular opposition figure Moaz Alkhatib to run against him was launched last week and quickly snowballed into tens of thousands of supporters.

Syrians inside besieged rebel areas as well as exiled supporters from as far away as Australia and Ukraine have posted photos of themselves with cards backing the former preacher at the Umayyad Mosque in Damascus.

Alkhatib, currently based in Qatar, welcomed the Internet campaign but echoed Akbik's objection to holding the vote amid the turmoil of civil war and under the supervision of Assad's authorities.

"We will not give legitimacy or cover to any elections carried out by the regime, which aims only to preserve its fast-waning existence," he said in a post on his Facebook page.

Holding an election appears impossible while 2.4 million Syrians are refugees in neighbouring countries, many millions more are displaced within Syria and Assad has lost control of northern and eastern Syria.

Even in Damascus, few believe the vote will go ahead.

"I heard that elections were going to be postponed another year or two because of the situation," said Samir, a middle-aged man during a casual lunch with his in-laws as the conversation turned into political chitchat.

"The new constitution limits the number of terms to two, which he's already had, so how can he run again?" said a hairdresser, as she worked on a client during a home visit.

In one of the rebel-held areas, Mouadamiya, an Assad opponent voiced a frequently heard sentiment.

"Assad plans to announce his nomination on the eve of elections, and then of course he'll win because only people in loyalist areas will be able to vote, and then he'll say: 'Oh look, the people want me'," he said.

In government-held areas of Damascus, many people are starting to feel pressure to show support.

Members of Popular Committees - civilians recruited and armed by the government - have been making their rounds on motorbikes, demanding shopkeepers paint the Syrian flag on their shutters.

Since the start of Syria's uprising, the flag has become synonymous with government loyalty. Rebels use a different flag that predates the current one.

"They told me and other shops on my street to paint the colours of the flag right away," said one shop owner in the middle class neighbourhood of Rukn al-Din. He was warned that the first offence would cost him a fine of 5,000 SP ($30).

A second offence would mean imprisonment.

"I painted it the same day. I don't want trouble," he said.

In more upscale neighbourhoods like Shaalan, where authorities are less inclined to issue direct orders to privately owned businesses, peer pressure is just as effective.

"Two weeks ago I came to work and found my neighbours had painted the flag overnight," said one shop owner. "So I went ahead and painted mine. No one dares be the odd one out."

Some of the more bizarre manifestations of support for Assad include two Hummers, painted with the colours of the flag, that drive around town sometimes at odd hours blaring loyalist music and followed by several honking cars.

Young men and women have also embraced a new fashion for military fatigues and boots, part of the militaristic fervour whipped up by Assad's supporters.

One woman even dressed up her pet dog, a small Chihuahua, in military camouflage, much to the distress of people around her who thought the authorities might take offence.

"Don't worry about it. I've already taken him through several checkpoints, and they loved him, she said.